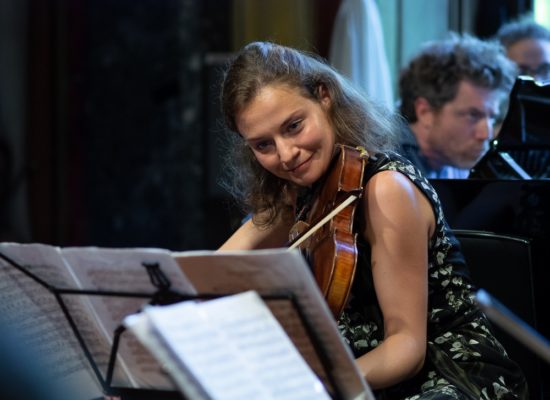 Fifteen musicians take part in the Festival’s final concert, also with two intervals. We begin in a light-hearted vein with the last of the twelve-year-old Rossini’s String Sonatas, scored for two violins, cello and bass. In places you can hear whispers of the mature opera composer, but this is a case of sitting back and watching four superb musicians let fly, especially in the Allegro tempesta. Sticking with all strings, the programme moves to Mozart’s supreme string quintet with another all-star line-up. There is something indescribably joyful about the effortless mastery and bewitching beauty of this quintet. The opening cello theme and the violin’s deft answer create a sense of serene spaciousness, as though an entire world existed inside those phrases. The final sonata-rondo is one of those movements you wish would never end. He treats the enchanting opening melody with incredible diversity and brilliance at each of its returns. This is music that restores one faith in the world, music to heal the broken-hearted.

After the first interval, we turn to the Dutch composer Michel van der Aa, who has a Cork connection as he wrote the opera Sunken Garden, based on the novel Cloud Atlas by Co Cork resident author David Mitchell. The text for his song cycle For the time being comes from two poems by Carol Ann Duffy and the music is for the eclectic combination of soprano, violin, bass and piano. It has a strongly theatrical impact and the composer insists it should not sound too cultured. Mark Simpson is both clarinettist and composer. His Lov(escape), a short work he composed for the BBC Young Musicians Competition, tackles, with the help of extended clarinet techniques, the age-old clash between the yearning for romance and the desperate need to escape romantic entanglements.  Weinberg’s delicious Clarinet Sonata was written in 1945 a year after his piano quintet. The War had ended in victory despite the almost inconceivable cost and the post-war suppression of artists had not yet begun so a genuine spirit of temporary optimism was possible and this Sonata reflects that.

The Festival concludes with another all-star cast for Schumann’s powerful Piano Quartet, which can be seen as the creative double of his more famous piano quintet. It shares the same key of E flat, the same extrovert approach to the combination of piano and strings – especially in the outer movements – and the same concern to link the movements by recalling a theme from an earlier movement. The Finale’s joyful rondo them will end our 25th Festival in suitably boisterous style.