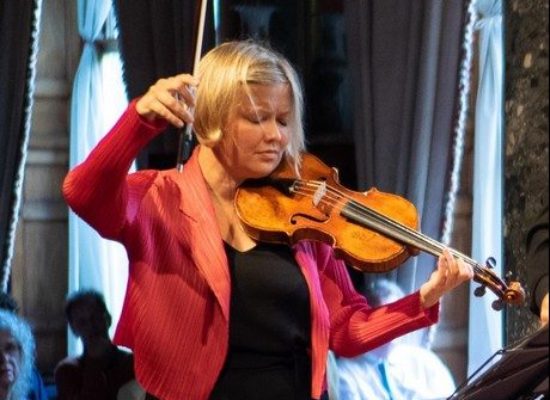 This specially filmed concert will become available to view here at 7pm on Sunday 5th July 2020. The link will be shared on our social media, or you can check-in to this event page to watch it here.

Our final concert brings us back to the Henry Wood Hall in London where Bantry’s favourite violinist Alina Ibragimova and pianist Alasdair Beatson take to the stage to play sonatas by Mozart, Debussy and Ravel.

Mozart’s E minor Sonata has been described as one of the most beautiful yet saddest works ever written in this genre. It was composed during his disastrous visit to Paris in 1778, when he was barely twenty-two. His unfortunate mother, who had accompanied him on his journey, fell ill in Paris and died there. The Sonata is in two emotionally charged movements. Despite Mozart’s trademark elegant, melodic eloquence the opening Allegro is full of anger and darkness. The second and final movement is a brooding Minuet full of melancholy and dark colours. The Trio is a miracle, seemingly conjured from nowhere, music so beautiful that it hurts, full of longing and sadness.

Debussy described his Sonata, his last work, as an interesting example of what a sick man might produce in a time of war. It was composed in 1917, part of what he planned to be a series of six chamber works by a musician français, as a statement of his musical heritage stretching back to the clavecinistes of the seventeenth century. The Violin Sonata also saw his last three stage appearances before he succumbed to cancer. There is no sign of illness in this strange and intimate work – in the opening Allegro moments of incandescent beauty trade places with violent drama. The central Intermezzo is a fantastical serenade with hints of Pierrot le Fou. The Finale looks back momentarily to the first movement before building up to a wild and exuberant dance.

Ravel’s famous Sonata begins gently, blossoming into a radiantly romantic lyricism, though this is almost kept from taking over by a mischievous ragtime figure that constantly pokes fun at the violin’s longing for the eternal heights. The blues movement is loved by violinists with its provocative syncopations and outrageous instrumental glissandi. The Perpetuum mobile finale begins circumspectly before the violin settles into two hundred bars of non-stop semi-quavers, while totally ignoring the piano’s attempt to re-introduce music from the opening Allegretto.