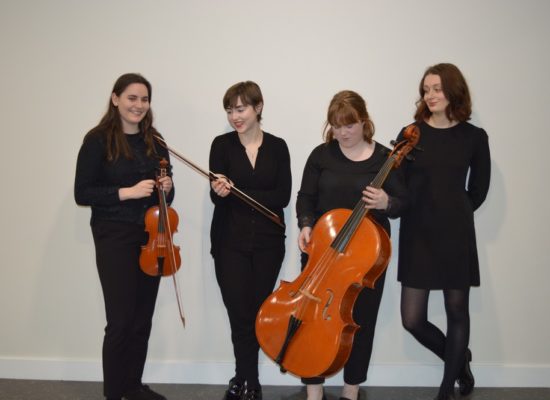 Danu Quartet, also from Cork, follow with the first of Beethoven’s Razumovsky Quartets. This is a big work opening with a glorious long-breathed melody led by the cello. We talk a lot about how revolutionary his late quartets were, but first audiences were stunned by this quartet, its length and power were unprecedented; the Adagio in particular was the first of many massive slow movements yet to come.

Debussy’s only quartet was part of the amazed flowering of French music either side of the new century led by Fauré, Franck, himself, Ravel, Chausson and the great violinist Ysaÿe. The young Meraki Quartet will undertake the very different problems set by Debussy with his exotic textures and colours. Audiences love the gentle beauty of this quietly revolutionary work.

The young Blasque Quartet will play Shostakovich’s Tenth Quartet that he dedicated to his friend and colleague Weinberg. It is a strange work, almost serene despite the fury of the Scherzo, whose demons are exorcised by the Passacaglia that follows. He wrote it at a composer’s retreat in Armenia and there are traces of Armenian folk music in this quartet adding to the feeling of unusual well-being that suffuses the whole work, well most of it.

The Hill Quartet from the Academy in London have undertaken to play the last of Beethoven’s late quartets. This is not as daunting as it sounds for it is a genial, good-humoured work, parts could almost be by Haydn.

There will be two intervals in this concert, thus the early start.