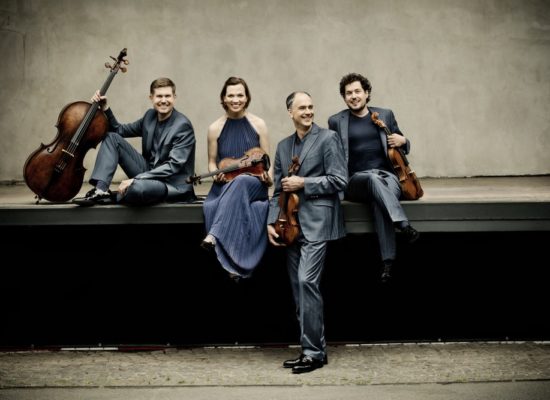 This specially filmed concert will become available to view here at 7pm on Sunday 28th June 2020. The link will be shared on our social media, or you can check-in to this event page to watch it here.

Today our journey around the world moves to Sendesaal Bremen in Germany that Signum Quartet describe as their second home. The Quartet was only just out of lockdown when they recorded this concert, but they still managed a wide-ranging programme including Haydn, Schulhoff, Schubert, Janáček and their own arrangement of a waltz by Tolstoy.

All three Quartets taking part in this project have chosen to play Haydn. Signum have picked the late G major Quartet from his Opus 77 set that he never completed, writing two and a half quartets before setting aside his composing at the age of 72. However his vigour was undimmed when he began the set in his customary forthright late style forged for the concert halls of London a few years earlier. It is fascinating to note that Haydn was writing this Quartet at the same time as Beethoven was working on his first set of quartets, the baton was being passed.

If you thought Haydn was a bit muscular, Schulhoff’s Five Pieces from the Roaring Twenties will be a jolt. Schulhoff was Czech but was conscripted to fight in the Austrian army in the War and he celebrated his return to musical life with experiments in Expressionism, jazz, Dadaism and neo-classicism before calming down (a bit) on his return Prague in 1923, when he wrote these Five Pieces that celebrate five dances, some tongue-in-cheek, some bursting with energy, some both.

Janáček, like Haydn, was another composer who had an extraordinary burst of creative energy lasting into his seventies that saw him composing among other works four operas and his two Quartets. His first Quartet takes its title – Kreutzer Sonata – from Tolstoy’s  novella that tells the story of a jealous husband, a musical wife and a peripatetic violinist teaching her Beethoven’s sonata with predictable and fatal consequences. Janáček takes the overlong tale and turns it into a gripping four act musical drama of a violent and jealous man confronting a tender but desperate woman.

Xandi van Dijk, the Signum violist, discovered a short waltz for piano, composed by Tolstoy so he arranged it for the Quartet to play before launching into the Janáček. Xandi has also been responsible for arranging a number of Schubert Lieder for quartet, two of which  – Wandrers Nachtlied and Auf den Wasser zu singen – feature in their programme, exquisite and beautiful interludes. The last piece in this programme is Schubert’s single movement Quartetsatz, his Unfinished Quartet if you like, often considered the first great Romantic string quartet. Its ingenious structure oscillates between extremes of anguish and lyrical tenderness, a short passionate work that amazes every time you hear it.

All works performed by Signum Quartet