Thanks to its rousing and lively interpretations and individual programme concepts, the Signum Quartet has made its mark on the international quartet scene and has become one of the most distinguished ensembles of its generation.

Awards include German Music Competition, Premio Paolo Borciani, London International String Quartet Competition. The quartet has performed at the Hamburg Laeiszhalle, the Pierre Boulez Saal and Berlin Philharmonie, the Gewandhaus Leipzig, the Luxemburg Philharmonie, the Concertgebouw Amsterdam, the Konzerthaus Vienna, the Wigmore Hall London, the Boston Harvard Musical Association as well as at the Schleswig-Holstein, Rheingau and Schwetzingen Music Festivals and at the BBC Proms.

Their recording No.’ (Bartók, Berg and Schnittke) was awarded the International Classical Music Awards 2014 ‘Best Chamber Music Recording’ and recently Aus der Ferne with works by Franz Schubert was awarded the Diapason d‘Or in 2018. 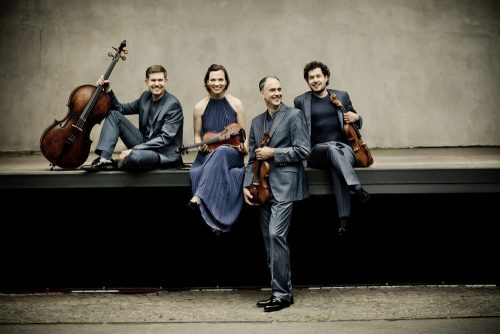