The Dahlkvist String Quartet’s new CD ”Andrea Tarrodi String Quartets” was voted best classical recording of the year 2018 by ”Grammis” (the Swedish Grammy Award) and received a double 5-star rating in BBC Magazine. Formed in 2007, the quartet has established itself at an international level and as one of the most sought after chamber music groups in Sweden.

In 2009 won the Swedish competition ”Ung&Lovande” (Young & Promising), the award being a prestigious concert tour around Sweden with 18 concerts. The quartet made its debut at the Stockholm Concert Hall in January 2011 with a performance of Steve Reich’s “Triple Quartet” and since then they have been a regular guest at the concert hall’s string quartet series. In the spring 2015 the quartet played in the world premiere of the highly acclaimed ballet Midsummer Nights Dream at the Royal Stockholm Opera House.

The Quartet has participated in several European chamber music festivals including Båstad Chamber Music Festival (2015), the Beethoven Festival in Krakow, Poland (2014) and at Grankulla Festival in Finland (2013). In 2009 the Royal Swedish Academy of Music awarded the Dahlkvist Quartet their Grand Ensemble Scholarship. The season 2013-2014 The Dahlkvist Quartet were coached by the Belcea Quartet, based in London.

Kersti and Jon all play on instruments on loan from Järnåker Foundation, Stockholm. Kersti plays a violin by Giuseppe Fiorini from 1923 and Jon is playing a Guiseppe Lucchi from 1976. Hanna ’s own cello is a  Nicolas Vuillaume from ca 1860.

The Dahlkvist Quartet’s repertoire combines the traditional old master works and contemporary repertoire, with a particular focus on Swedish, Nordic and Polish composers. The quartet always aim to bring new music to the stage and several works has been given world premiere by the quartet. 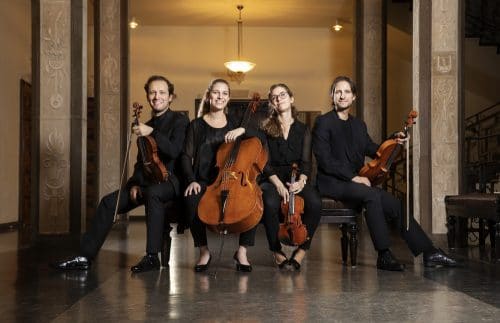