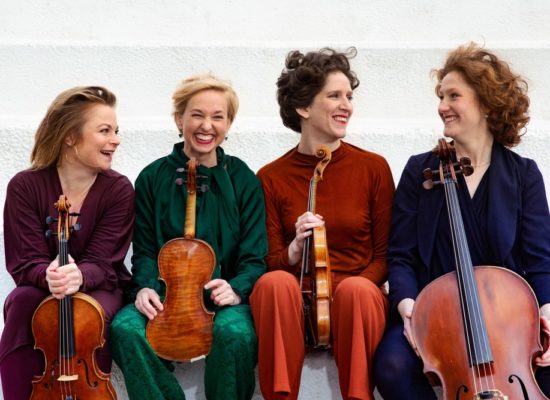 Ragazze Quartet is a trail-blazing young Quartet that actively seeks to attract a new audience for quartets through cleverly produced concerts. This is their introduction to this concert.

As the new Twenties commence, echoes of the Twentieth Century still are sounding. In this programme the Ragazze Quartet acts like a mirror, taking the audience back to the Roaring Twenties while also looking into what we think might be the future. As in the 1920s we balance between tension, hope, destruction and resurrection, as did composers like Bartók and Korngold a century ago. Next to the third string quartet by Bela Bartók and the second by Erich Korngold, we will present a new work by Garth Knox, who describes his new piece ‘Four into Twenty:’ ‘I imagine a musical work where qualities such as masculine, feminine, introvert, extravert, passive, active, positive or negative can circulate without necessarily belonging definitely to one person. The network model permitting the spontaneous creation or abandoning of groups and currents at an accelerating rate can be perfectly represented by the Quartet, where the relational possibilities are infinite. These new types of social relationship will dominate the new Twenties, perhaps the string quartet is a way of letting us hear our future?’

You will see the quartet in a scenery made up of pictures that were selected by set designer Felipe Gonzales Cabezas, with whom they collaborated before. Felipe chose old and new pictures and combined them in sets of two that have remarkable similarities or wry contradictions. Dance, movement, protest and progress are central themes which now appear to be even more urgent than we could have anticipated a few years ago when we created this programme.

All works performed by Ragazze Quartet