The Ragazze Quartet plays both classical and modern string quartet repertoire: inspired and on the highest level. With attractive but unconventional programmes the quartet has come to be one of the most fresh and leading voices in the world of classical music. In innovative programmes it embarks on collaborations with the most original voices in theatre, dance and literature. With performances that speak to all senses they succeed in securing an audience for the rich classical music tradition. In this way they warm the hearts of both the die hard listener and the novice for the string quartet repertoire of the past and of our present day.

The Ragazze Quartet plays an average of seventy concerts a year in concert halls like the Concertgebouw and the Muziekgebouw aan ’t IJ in Amsterdam, but can also be seen in concert series all through the Netherlands and on festivals like Oerol on the island of Terschelling. Tours abroad brought them to England, Sweden, China, Japan, Indonesia and the United States of America, to name a few.

Ragazze likes to join forces with young musicians and theatre makers just as with leading organisations such as Netherlands Dans Theater (NDT), the Kronos Quartet, Orkater and the Holland Festival. In addition, the quartet has taken over artistic leadership of chamber music festival September Me in Amersfoort. September Me transforms Amersfoort into the epicentre of trendsetting classical music. Ragazze play themselves and invite the newest generation of top class artists that are not afraid of breaking with tradition.

The Ragazze Quartet was enrolled for the two-year full time course of the Dutch String Quartet Academy and graduated from it in 2011. In 2013 they won the Kersjes Prijs, a prize that is awarded on a yearly basis to extraordinary talent on the Dutch chamber music scene.

In 2017 the Ragazze Quartet won the Operadagen Rotterdam Award for “..their quirky music theatrical approach, their social engagement and the ease with which they dare to think outside the borders of their traditional expertise”

The Ragazze Quartet receives multiannual financial support from the Fonds Podiumkunsten and the Amsterdams Fonds voor de Kunst. The Nationaal Muziekinstrumenten Fonds put Jeanita’s violin and Annemijn’s bow at their disposal. Furthermore the Ragazze own a set of classical bows made by Andreas Grütter through the support of the Stichting Eigen Muziekinstrument. 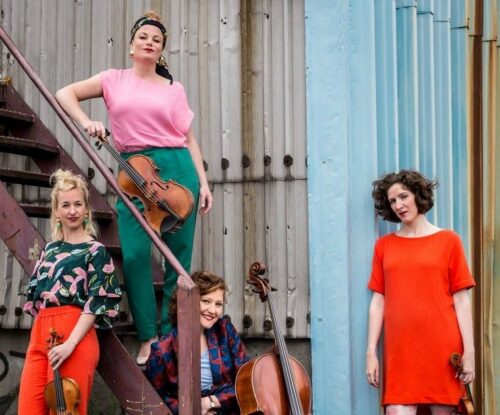