As one of the most exciting young soloists emerging from Scandinavia, Swedish born violist Ellen Nisbeth, recently selected by ECHO (the European Concert Hall Organisation) as one of its ‘Rising Stars’ of the 2017/18 season. Making her debut on the international music scene performing at prestigeous venues, such as Concertgebouw Amsterdam, Barbican Center London, Musikverein Vienna, Cité de la Musique Paris and BOZAR Brussels among others.

Nisbeth has recently started a collaboration with BIS Records and in 2017 she released a highly praised recital disc; Let Beauty Awake. “Dream team” “A genuine rising star” The Strad Recommends October 2017. “Nisbeth’s tone is … endlessly nuanced.” “Fresh thouhgthful perspectives” Gramophone Magazine October 2017. “Ellen Nisbeth is new to me, and what a revelation she is!” “Tabea Zimmermann tops my list to which I now have added Ellen Nisbeth. What a beautiful tone and what a rare purity she draw from her Dom Nicolo Amati viola.” HRaudio July 2017

Ellen Nisbeth is the recipient of the Swedish Soloist Prize and the winner of the Nordic Soloist Prize in 2013. A unanimous jury concluded: “The violist Ellen Nisbeth performs with a natural integrity and stage presence. With sensational musicality and personal expression, she enchants the audience. The variation in tone colour seems endless in Ellen Nisbeth’s play, and she is able to communicate the most intimate nuances to the audience, who cannot remain unmoved by the performance.”

In 2014 Ellen and the Swedish Radio Symphony Orchestra (Daniel Blendulf) gave the world premiere of a viola concerto written to her by Britta Byström. The recording was released by Daphne Records the fall of 2014 and has been critically acclaimed by national and international media. For her performance of the Byström Concerto, she was named “A model soloist” by Gramophone and nominated for a Swedish Grammy in 2015. The viola concerto was preceded by Dream Day, a piece for viola solo Byström wrote for Nisbeth premiered in Finland on Finnish Radio in 2013.

Due to Nisbeths acclaimed perfomances of Arne Nordheim Fractures for viola solo, she was informed that the composer intended that the cello concerto ”Tenebrae” would be played on the viola as well. Nisbeth made her own edition published at Edition Wilhelm Hansen and gave the world premiere in 2014 together with Ensemble Ernst (Thomas Rimul). Nisbeth and Ensemble Ernst received standing ovations and All About Jazz wrote; “Tenebræ” featured an absolutely stunning violist, recent winner of the “Soloist of the Year” Swedish Soloist Prize (2012), Ellen Nisbeth. Impassioned, dynamic and clearly completely inside the music, the almost unbelievable 24 year-old violist is, in fact, still studying, gearing up for a 2013 performance with the Norwegian Radio Orchestra as part of her soloist exam. If she’s already this impressive, it’s almost impossible to imagine where she’ll be when she hits 30.

For her recording of Tenebrae viola concerto by Arne Nordheim (LAWO Records 2015) Klassisk Musikkmagasin top rated and wrote; ”Even more sensational is Ellen Nisbeth, exquisite in her own edition of Nordheim’s viola transcription of Tenebrae from 1982. Nordheim’s chamber orchestra version from 2001 lacks a bit of the original version’s inevitably power. Nisbeths version, orchestrated in cooperation with Rimul, and her accurate playing, comes closer Nordheim’s original idea than the other attempts, except Truls Mørk in the original cello concert.”

She performs on a Dom Nicolo Amati viola from 1714. 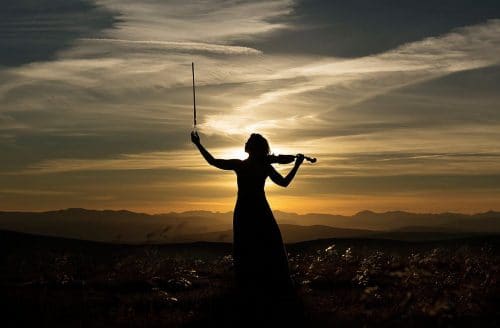