Finalists and prizewinners of the International Anton Rubinstein Chamber Music Competition, 2018, the Echéa Quartet was formed in 2017 at the Royal Academy of Music, London. They were recently selected for the prestigious Frost Trust/Advanced Specialist Strings Ensemble Training Scheme at the Academy, where they study with John Myerscough. The quartet also receive tutelage from Christoph Richter,  Levon Chilingirian and Garfield Jackson. The quartet are 2019 Concordia Foundation Artists.

In October 2017, the quartet were awarded the St Peter’s Chamber Music Prize, for which they have performed two recitals as part of the Eaton Square Concert Series. They have performed in masterclasses for , Adrian Brendel, Miguel da Silva, Hartmut Rohde and members of the London Haydn and Belcea quartets. In 2018, the quartet performed at the Brundibár Arts Festival, as well as a side-by-side project with the Nash Ensemble at the Wigmore Hall.

In the summer of 2018, the Echéa Quartet were the string-quartet-in-residence at Ferrandou Musique, Dordogne, where there gave many recitals as well as collaborating with the British baritone, David Wilson-Johnson. They were also awarded the role of Fellowship Quartet at Wintergreen Performing Arts, where they toured across Virginia, and worked and performed with violinist Rachel Barton Pine.

Highlights of 2019 include a performance at the Musikverein in Vienna, as well as a collaboration with Marin Alsop at the World Economic Forum in Davos, Switzerland. Dedicated to the performance of new music, the Echéa Quartet will continue to foster their relationship with London-based composers. In light of this, they will be performing at the Krama Contemporary Music Festival in Athens, Greece, as well as a quartet tour of the West Coast of North America. 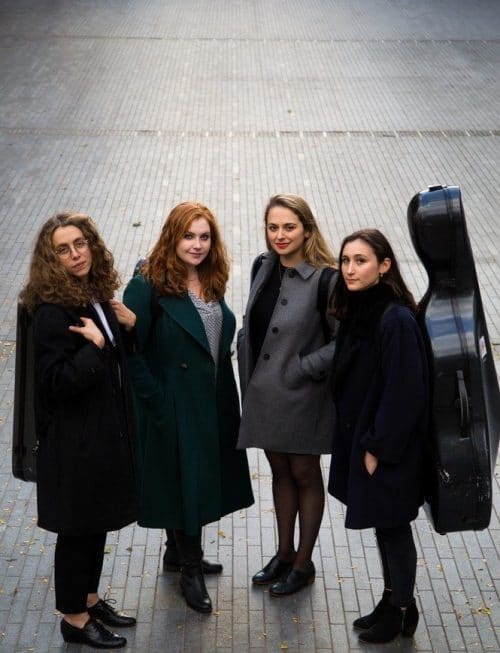