In a normal year next Friday would see the first of over eighty events – chamber music concerts, quartet masterclasses, artist interviews, instrument making workshops and talks – take place in Bantry, bringing over a hundred musicians from all over the world to the town. But just because Fate and the Virus intervened so dramatically, it does not mean the Festival should cancel all music making.

The international nature of the Festival gave us the opportunity to gather together some of the cancelled Festival musicians in a selection of venues around Europe and USA. Programmes were thought up that took into account the isolation of the last three months and production companies were located to film and record the performances as lockdown regulations were relaxed over the last ten days. Although the concerts will be pre-recorded, it is the nearest we could get to live performance. As I write the first three performances are safely logged in, of the rest some are still being edited and two have not yet taken place. Such uncertainty is the nature of the times.

Despite everything it is still Beethoven Year, so the great Vadim Gluzman will play the Spring Sonata in a studio in Chicago, Rosanne Philippens will perform the Kreutzer Sonata in Amsterdam and also in Amsterdam Dudok Quartet will bring us the stupendous late Quartet that climaxes with the maddest fugue in Western music. Schubert does not need an anniversary to justify several appearances – the brilliant Ukrainian pianist, Anna Fedorova, whose Rachmaninov concerto performances have been viewed millions of times, will join string players led by Mairéad Hickey in the greatest of the Schubert Piano Trios and his evergreen Trout Quintet. And the Signum Quartet, performing in Bremen, do a special line in arranging Schubert songs for quartet.

The lively French wind quintet, Ouranos Ensemble, performed in a part of Ireland, the Centre Culturel Irlandais, in Paris, while the Dagda Ensemble, led by Caitriona O’Mahony, were hosted by the Triskel in Cork to tell the story of the women composers who led flourishing careers in seventeenth century Italy and France.

Meanwhile in the Henry Wood Hall in London, Bantry’s favourite violinist, Alina Ibragimova, took to the stage with Scottish pianist, Alasdair Beatson, to play well-loved sonatas by Mozart, Debussy and Ravel. At the same well-known venue, Doric Quartet recorded for us an early Haydn Quartet and Britten’s final one, known as La Serenissima for the final devastating Passacaglia was composed in Venice.

Every evening at 7pm from Friday 26 June to Sunday 5 July, we will feature one of these concerts. On the final two days you can also catch a Coffee Concert at 11am.

You can find the full virtual programme here.

Each event page on our website, in addition to our usual information, notes, artists, composers and their works, also includes the exclusive pre-recorded event video, primed to go live when the event begins.

Event videos will also go live at the appointed hour on our Vimeo Festival Showcase and YouTube Festival Playlist – note these links will not be available until Friday 25th June around 7pm.

We hope this variety of portals to our online concerts allows everyone to experience our 2020 Virtual Chamber Music Festival with ease. 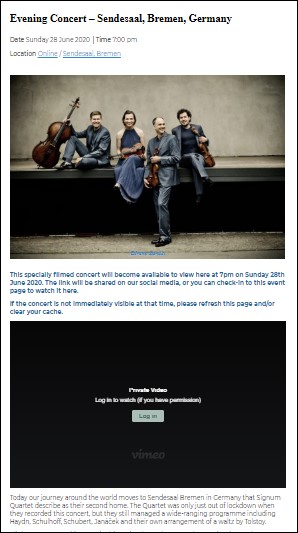 These concerts have been made possible thanks to the generosity of the Festival ticket-holders, subscribers, donors and majors donors to whom we dedicate this series. Also both Cork County Council and Failte Ireland made funds available for which we are most grateful. West Cork Music is funded by the Arts Council.

And Finally ... We're Not Just Virtual

Our staff are working from home due to COVID-19. However, during our Virtual Festival we are still here for you. To ensure you can contact us, our phone line (00 353 27 52788) will be manned from 11am-5pm every day during the festival. We will also be responding to emails to info@westcorkmusic.ie during those times – and out of hours. If you have any queries, don’t hesitate to get in touch.