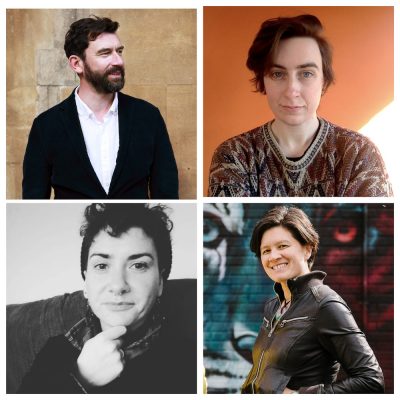 Queer Love: An Anthology of Irish Fiction was published by Southword Editions in 2020 and is edited by Paul McVeigh.

The collection seeks to redress the lack of acknowledgement of the LGBTQI+ community in Irish literary anthologies, with a mixture of established writers of international standing, writers who have been making a splash in recent years and new emerging writers.

This event will see Paul McVeigh, the editor of the anthology, in conversation with three of the contributors, James Hudson, Emer Lyons and Shannon Yee.

Paul McVeigh’s debut novel, The Good Son, won The Polari First Novel Prize and The McCrea Literary Award and was shortlisted for many others including the Prix du Roman Cezam in France. Paul began his writing career as a playwright, in Belfast, before moving to London to write comedy. His short stories have appeared in anthologies, journals and newspapers, as well as, read on BBC Radio 3, 4 & 5 and on Sky Arts. Paul co-edited the Belfast Stories anthology and edited Queer Love: An Anthology of Irish Fiction  and The 32: An Anthology of Irish Working Class Writers. He is associate director of Word Factory, ‘the UK’s national organisation for excellence in the short story’ The Guardian, and he co-founded the London Short Story Festival. Paul reviews and interviews authors for The Irish Times and his writing has been translated into seven languages.

James Hudson is a Dublin-based speculative fiction writer. His fiction is published with Southword Editions, Stone of Madness Press, and forthcoming with Pop Up Projects; his non-fiction is published with Monstrous Regiment Publishing and forthcoming with The Stinging Fly. He also works with the Small Trans Library Dublin and the Trans Writers Union to improve the accessibility of queer writing to trans people in Ireland. His short story You Roll is published in Queer Love: An Anthology of Irish Fiction.

Emer Lyons is a lesbian poet from West Cork living in Dunedin, New Zealand. In 2017 she was the recipient of the inaugural University of Otago City of Literature PhD scholarship, she has been shortlisted for the Fish and Bridport poetry prizes, her play The Green was nominated for Best Narrative in the 2018 Dunedin Theatre Awards, and in 2020 she was nominated for a Pushcart prize for fiction. Her short story Daytime Dogger is published in Queer Love: An Anthology of Irish Fiction.

Shannon Yee (Sickels) is an award-winning writer and producer. Her perspectives as an immigrant, ethnic minority, queer artist-parent with a disability living in NI are deeply embedded in her work. Shannon has been fortunate to receive a number of awards and grants, including the ACNI Major Individual Artist Award (2017). Most notably, her Reassembled, Slightly Askew sonically immerses audiences in her autobiographical experience of nearly dying and subsequent acquired brain injury (www.reassembled.co.uk) and has toured locally, nationally and internationally in arts festivals and medical training settings since 2015. Shannon’s first short story, ‘The Brightening Up Side’, published in Belfast Stories (Doire Press, 2019), addresses new motherhood, racism and tenacity in North Belfast. She is currently working on her first collection of short stories, a BBC/The Space ‘Culture in Quarantine’ online dance film commission called Pandemic Parenting: Pandemonium, and a children’s book based on lockdown’s impact of young children’s mental health. Shannon is also an LGBTQ+ activist; in 2005 her and her partner were the 1st public civil partnership in the UK. Her short story Thumbnails is published in Queer Love: An Anthology of Irish Fiction. (www.s-yee.co.uk)