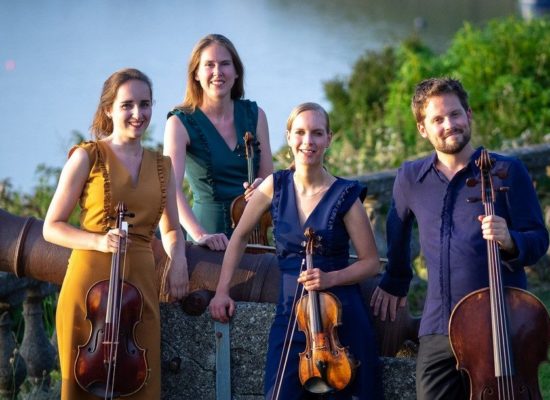 When it comes to string quartets Haydn is the oldest kid on the block and Caroline Shaw is one of the youngest. By general consensus Haydn’s six Opus 20 quartets are where the string quartet came of age. Not so many years ago the only Haydn quartets we heard would have been the flashy later ones he wrote for his London trips, the earlier quartets were just for the specialists. Now there is a legion of brilliant young Quartets all searching for new or different repertoire including the rediscovery of old masters. The great art of string quartet playing is going through a golden period and we are blessed with Quartets willing to explore the repertoire.

Caroline Shaw is a multi-tasking musician, singer, composer, producer and violist, who won a Pulitzer for her remarkable Partita for 8 Voices. Her Entr’acte was inspired by a Haydn quartet, music she describes as taking you to the other side of Alice’s looking glass. Her Valencia must be the first quartet written to celebrate an orange.

Deirdre Gribbin’s Merrow Sang is the mermaid’s song emerging from beneath the waves, sometimes strong, sometimes only half heard, a touch of sea-borne magic for a Quartet named after a different ocean to play for us. Shostakovich’s devastating A major Quartet comes from a very different place, the last of his war works, a partner to his E minor Piano Trio, both composed in mourning for his greatest friend Ivan Sollertinsky. At times savage, at times unbearably sad, we understand immediately that this is a great composer, who had lived through Stalin’s worst excesses and the deprivation and fear of total war, telling us as it was, no holds barred.