The French cello has its muse, and her name is Emmanuelle Bertrand. ~ Diapason, December 2015

By her own admission, Emmanuelle Bertrand is not one of those ‘competition junkies’ who are addicted to the pursuit of international prizes. All the same, she does hold diplomas from the Paris and Lyon conservatoires, is a Laureate of the Rostropovich Cello Competition, has won first prizes from the Japan Chamber Music Competition and the Académie Internationale de Musique Maurice Ravel, a Révélation Classique award from ADAMI, a Grand Prix de la Critique and so on. It was a Victoire de la Musique that drew her to the public’s attention in 2002, and since then every one of her recordings has been hailed as an event by the national and international press, which has showered her with distinctions: a Diapason d’Or of the year, a “Choc” from Classica, a Gramophone Award, a Cannes Classical Award, a “Bestenliste” award from the German Record Critics’ Award and so on.

With her radiant and generous personality, Emmanuelle Bertrand has a rare gift for making bold choices of repertoire accessible to the widest audiences, along with an insatiable curiosity. She has inspired and had dedicated to her new works that she has then premiered, by Bernard Cavanna, Thierry Escaich, Pascal Amoyel, Nicolas Bacri, Edith Canat de Chizy and others. She also writes and creates stage shows such as Block 15, ou la musique en résistance (directed by Jean Piat), which tells the true story of musicians whose lives were saved by music during the Second World War, or more recently Le violoncelle de guerre in homage to Maurice Maréchal and the makeshift cello he had made for him in the trenches of the First World War. Both these productions were adapted for France Télévisions.

As early as 1999, the composer Henri Dutilleux spotted Emmanuelle Bertrand’s exceptional talent, describing her as a “real revelation”. More recent verdicts have included the following:

“Emmanuelle Bertrand projects (such a rare thing) a voice that is hers alone, and that seems imbued with a superabundance of soul and love…” La Terrasse

“It is hard to know what to admire more: the unending virtuosity or the vibrant elevation of the discourse, the marvellous fluency of line or the incredible timbral palette.” La Croix

“Emmanuelle Bertrand is a passionate musician, always demanding high standards and pondering her mysteries. She can transcend mere technique to let the mind take wing.” Télérama

“She can make a washing line sing like a nightingale! She has a touch that is light, precise and fluent, yet with an imperturbable firmness.” La Montagne

She is an enthusiastic chamber musician and for the last 15 years has performed in a duo with the pianist Pascal Amoyel, with whom she explores unpublished works just as much as the core repertoire. Keen to transmit her art and also continually to rethink the musician’s role in society, Emmanuelle Bertrand devotes some of her time to teaching chamber music at the Paris Conservatoire and cello at the Gennevilliers Conservatoire as well as in international masterclasses.

Voted Artist of the Year in 2011 by Diapason magazine and France Musique listeners, she is the artistic director of the Beauvais Cello Festival and a patron of the Estival de la Bâtie in the department of Loire. She is a Chevalier de l’Ordre des Arts et des Lettres. 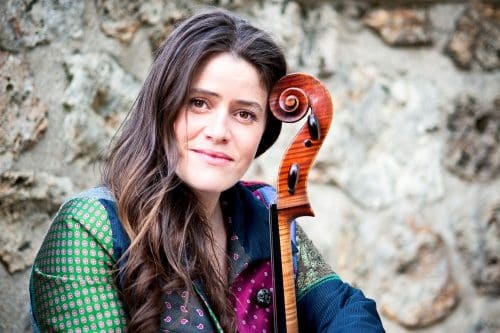