Formed in September 2018 at the Royal Irish Accademy of Music, the Docklands Quartet draws its members from Ireland, Poland and the USA.

Following studies with Sebastian Liebig, Fionnuala Hunt and Eyal Kless, Christopher Quaid studied with Jan Repko at the Royal College of Music, London and has performed extensively with the RTÉ National Symphony Orchestra of Ireland and the RTÉ Concert Orchestra as well as with the RCM Symphony and Philharmonic Orchestras. Making a return to WCCMF, Claire Austen has studied with Finnoula Hunt in Dublin and Ernst Kovacic in Vienna. She was a finalist in NCH’s Young Musician of the Year 2015 and has performed as a soloist in Carnegie Hall, and in Cadogan Hall, London. Philip Keegan graduated from the RIAM with the Briscoe Cup for the ‘Outstanding Student of the Year’ 2017/18. He is currently studying viola with Simon Aspell and voice with Lynda Lee. Schuyler Lillian Perry has performed as a soloist and chamber musician throughout the United States, Ireland, England and the Czech Republic. She holds degrees in performance and pedagogy from Julliard and the Cleveland Insitute of Music, has participated in masterclasses with musicians including Itzhak Perlman, Peter Wiley, Richard Harwood, Yo-Yo Ma, Zuill Bailey and Joel Krosnick and is currently studying at RIAM with William Butt.

The quartet has studied with internationally renowned chamber musicians and ensembles including The Emerson Quartet, Navarra Quartet and Professor Daniel Rowland. The Docklands Quartet look forward to a busy performance calendar, including a roster of international performances and competitions in the coming year. 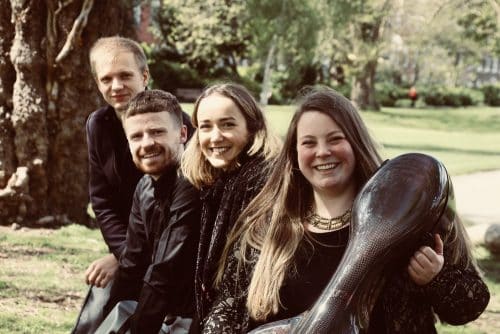