Irish soprano Anna Devin is widely admired for her “impeccable Baroque style” (Bachtrack), “vocal control…artistry and musico-dramatic intelligence,” (Opera News). An alumna of the Royal Opera House’s Jette Parker Young Artist programme, the Royal Irish Academy of Music, Guildhall School of Music and Drama, and the National Opera Studio, Ms Devin is ‘an ideal interpreter of Handel’s ‘sex-kitten’ roles’ (Opera Magazine) and has gained recognition across the world for her work in the Baroque and Classical repertoire.

The 2018/19 season begins with Ms Devin’s Opernhaus Zurich debut as Rosane La Verita in cimento, followed by her return to Teatro Real, Madrid to perform the title role in La Calisto and Pamina Die Zauberflöte for Irish National Opera. Her concert appearances will include a Handel programme with the Irish Baroque Orchestra, Handel’s Messiah with the Royal Northern Sinfonia and at the Albert Hall with the Royal Philharmonic Orchestra and the RTE Concert Orchestra in Halle, a New Year’s Eve concert with the RTÉ National Symphony Orchestra, Mendelssohn’s ‘Lobgesang’ Symphony with the Irish Chamber Orchestra, Handel’s Esther with Irish Baroque Orchestra and Handel’s Athalia at the London Handel Festival. She will also make her recital debut at the West Cork Chamber Music Festival with Joseph Middelton.

Anna Devin’s recordings include Arminio and Faramondo for Accent from the International Händel Festspiele Gottingen; Mozart in London, Il re Pastore and Mitridate, Re di Ponto with Classical Opera for Signum Classics; and ‘Arias for Benucci’ with Arcangelo for Hyperion. She was also an Associate Artist with Classical Opera, with whom she records and performs regularly.

In addition to her work on stage, Ms Devin is proud to be an Ambassador for the British Dyslexia Association. She has also been open with the public through the media and events about growing up with dyslexia, saying: “Being different is not a bad thing. Not fitting in with the crowd is a blessing as we all have our own journey and being forced to find your own path brings originality.” She is passionate about nurturing new talent and gives masterclasses at the Royal Irish Academy of Music, Dublin, as well as coaching at the Royal Academy Opera Course, London.

When not on stage, Ms Devin is a keen runner, yogi and enjoys keeping fit and relaxing with her husband, young daughter and Norwegian Forest Cat in their Bedfordshire, UK home. 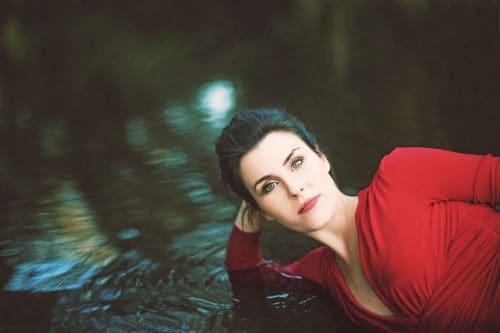