“Even music that is distinctly subfusc receives performances that squeeze every last morsel of rhythmic or melodic variety out of their formulaic phrases, while the authentically first-rate really sparkle with imaginative life,” writes The Guardian in a review of the recent release of two albums with English and French Trio Sonatas by the Ensemble Diderot. Described as “the ensemble for Baroque chamber music” by the German MDR and praised for its “warm tonal brilliance and razor-sharp definition” by Gramophone Magazine, Ensemble Diderot established itself in recent years as one of the foremost European chamber music groups performing exclusively on period instruments. The French music magazine Classica qualified them as “splendidly prepared to follow in the footsteps of the legendary Musica Antiqua Köln.”

The ensemble’s core consists of four musicians around violinist and founder Johannes Pramsohler, who devote themselves to the exploration and performance of the baroque chamber music repertoire. The ensemble is based in Paris and owes its name to the French philosopher Denis Diderot. It dedicates itself primarily to the inexhaustible heritage of trio sonatas, quartets and larger ensemble sonatas of the seventeenth and eighteenth centuries. A busy schedule and meticulous rehearsal have given the group a cohesion akin to that of a permanent string quartet.

The ensemble has been an acclaimed guest on stages and festivals at home and abroad, and was invited as ensemble-in-residence to Royaumont (France) and Aldeburgh (Great Britain). In 2018 it gave its acclaimed debuts at the Cologne Philharmonie and Vienna’s Konzerthaus.

Always taking chamber music as the starting point, Ensemble Diderot also appears in an orchestral formation. Performed in this way were Handel’s Concerti grossi op. 6, Bach cantatas, and operas such as Purcell’s Dido and Aeneas, Falstaff by Antonio Salieri, Croesus by Reinhard Keiser, and the oratorio Athalia by George Frideric Handel. Since 2018 the ensemble has had its own chorus.

Live concert recordings are regularly broadcast by international radio stations. Its highly regarded CD recordings for Audax Records, which have been referred to as being “standard-setting,” have been awarded international prizes on a regular basis, including the Diapason d’Or, Preis der deutschen Schallplattenkritik, Gramophone Editor’s Choice, International Classical Music Award (ICMA), BBC Music Magazine choice, and CD of the Month (Record Geijutsu, Japan).

Ensemble Diderot is in residence at the Euregio Cultural Centre in Toblach, Italy, and receives support from the French Ministry of Culture, the Caisse des dépots et consignations, and the Fondation Orange. 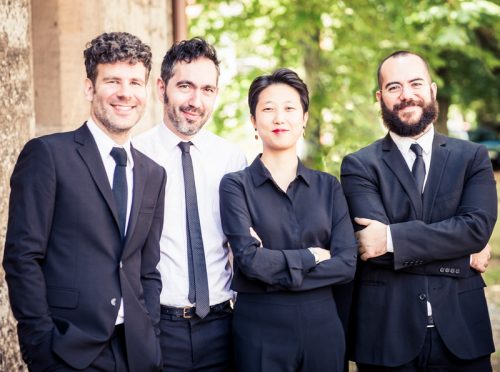