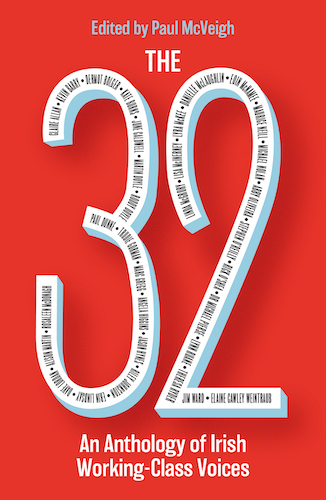 Rick O’Shea is a broadcaster with RTE – he is on RTE Gold weekday mornings and presents The Book Show on RTE Radio 1. He runs The Rick O’Shea Book Club (Ireland’s largest), chooses the quarterly Must Reads lists for Eason with author Sinead Moriarty, and recommends books on RTE Radio 1’s Today Show. In recent years he has been a judge for the Costa Book Awards, Irish Writers Centre Novel Fair, and judging chair for the Dalkey Literary Awards. He regularly hosts public author interviews, has previously been curator of the Waterford Writers Weekend, is current literary curator for the UCD Festival and is part of the advisory group for the Dublin City Council Culture Company. Rick has pieces in two 2021 anthologies – Open House and The 32: An Anthology of Irish Working-Class Voices which is published in July.

The 32: An Anthology of Irish Working-Class Voices

A recording of this will be available on our youtube channel in the coming weeks
Date 29 July 2021
Time 7:00 pm
Location Zoom
Admission Free
Read More