Neil Ó Lochlainn is a musician and composer from Clare. His work is dedicated to exploring the contemporary and the universal in the local. He began learning Irish traditional music on the flute and tin whistle at a young age from Denis Liddy and Eamonn Cotter and studied double bass with David Whitla at the Cork school of music.

He is the co-founder and artistic director of Ensemble Ériu, a group set up to develop new conceptualisations in Irish traditional ensemble playing. The group have released 3 critically acclaimed albums and in 2015 received the TG4 Gradam Comharcheol award. Their second album ‘Imbas’ was nominated by the Irish Times for traditional album of the year and third album Stargazer was listed in Songlines’ essential Irish albums of all time.

In 2016 he founded Cuar, a chamber ensemble dedicated to exploring composition and improvisation within the framework of Irish traditional music. They released their debut album Roscanna, a specular suite in 5 movements, in 2017 on Raelach Records. The album has been described as “an ear craningly beautiful missive from the new post genre frontier.” (The Irish Times). Cuar’s second album Umhaill a suite of music composed while resident at the Heinrich Boll cottage, Achill Island will be be released in 2022 on Diatribe records.

As a jazz musician he has been bassist of choice and collaborated with many of Ireland’s leading musicians including Myles Drennan, Richie Buckley, Hugh Buckley, Meilana Gillard, Ian Date, Seán Carpio, Mike Nielsen, Greg Felton. He was a member of the Louis Stewart quartet from 2012 until the guitarists death in 2016. He has received numerous bursaries and scholarships to attend workshops and residencies including the Banff Centre Creative Music workshop, Canada, the S.I.M (school for improvisational music) workshop, New York, the Gullisktan residency, Iceland, the Cill Rialaig residency, Ballinskelligs, Kerry and the Centre Culturel Irlandais, Paris.

He has studied Karnatic music at the Brhaddhvani Institute, Chennai with Dr. K.S.Subramanian and has travelled throughout Ghana to study the traditional music of the Ewe and Dagara people. In 2019 he received the Next Generation bursary from the Arts Council of Ireland.

“A distinctive musical intelligence that, in my experience, is only to be found in a small number of people” Tony MacMahon 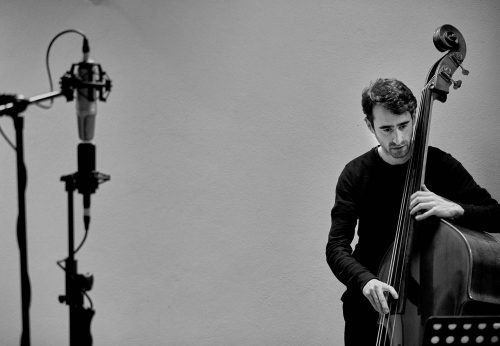