Ensemble Dagda are baroque violinists Caitriona O’Mahony, Marja Gaynor; baroque cellist Norah O’Leary and harpsichord player Kieran Finnegan. This rising Irish early music group was formed in 2014 and are based in Cork. Popular with audiences for their playful interpretations and engaging performances, in recent years they have championed lesser-heard works by seventeenth-century composers and in particular works by women composers of the Baroque era. The group have been invited to play in the West Cork Chamber Music Festival, East Cork Early Music Festival, ‘Finding a Voice’ Festival, Clonmel, and the Kaleidoscope Night Series, Dublin. In varied incarnations its members have played in the Encanto Salon Music Festival Helsinki, in the American Irish Historical Society New York, the Liszt Academy Budapest, the National Gallery of Ireland, and Dublin Castle.

Their particular love is in bringing concerts to venues outside major city venues in varying places around the Irish countryside, from newly built arts centres to some of Ireland’s most historic and atmospheric churches. The ensemble are passionate about education and making music accessible and engaging to everyone. They have brought workshops to primary and secondary schools around Ireland, introducing students to historical instruments, and the style and contexts of music they play.

They take their name from Irish mythology, and were inspired by the magical harp which was played by Dagda, the king of the Tuatha de Danann. 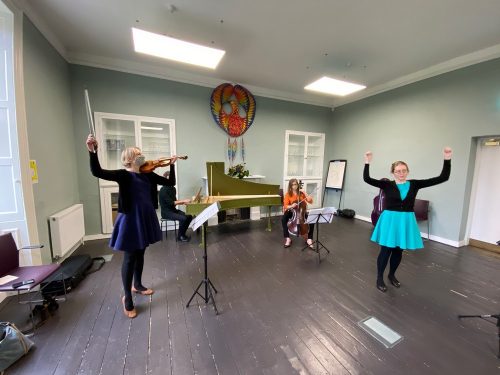