Steve Cooney is best known for his development of an influential style of guitar accompaniment to traditional Irish dance music which he developed in West Kerry, and for which he won the National Entertainment Award with Séamus Begley in 1997.

Born in Melbourne Australia in 1953, he came to Ireland in 1980 and maintains his connections with the Aboriginal culture there, into which he was initiated. He has ancestral links with Tipperary, Cavan and Galway.

He has participated in making more than 250 CD’s, either as a guitar or bass player or as producer and engineer. Also a poet and songwriter, he has worked with many iconic international artists in rock and country music  but his primary focus is Irish traditional music, and fusions of that genre.

He recently released a CD of solo guitar interpretations of ancient harp tunes, Ceol Ársa Cláirsí: Tunes of the Irish Harpers for Solo Guitar.  He is also recording  fusion music with his band Éiníní.

‘His influence on Irish trad guitar is akin to Hendrix’s on rock: he raised the bar and the rest of the world is still catching up. Since Cooney, and in his image, guitar accompanists have driven Irish music with momentum and visceral energy, though none has yet matched Cooney’s genius.’ 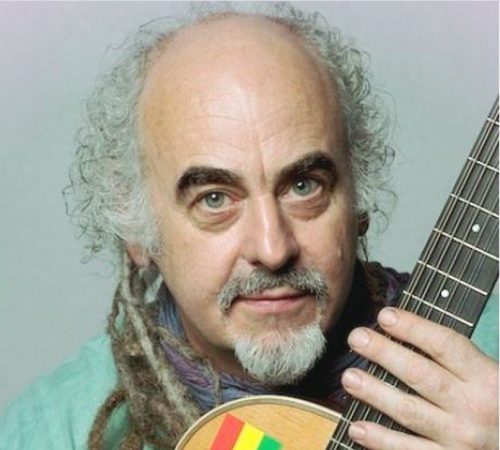