Having won a Victoire de la Musique in 2005 in the category “Instrumental soloist: revelation of the year”, in 2010 Pascal Amoyel was awarded a Grand Prix du Disque by Warsaw’s prestigious Fryderyk Chopin Society for his complete recording of Chopin’s Nocturnes, a distinction previously accorded to the cycles by Martha Argerich and Nelson Freire. The magazine Classica described the recording as a “miracle of a kind one no longer dared to hope for, which one listens to open-mouthed at so much beauty”. His interpretation of Liszt’s Les Funérailles has also been hailed as one of the all-time key performances, while his Harmonies Poétiques et Religieuses was chosen as one of the five best recordings of 2007 by the Arte TV channel.

Soon after he began to study piano at the Ecole Normale de Musique de Paris, aged 10, Pascal Amoyel was spotted by Georges Cziffra, with whom he studied in France and Hungary. At the age of 17, after a scientific Baccalauréat, he decided to devote himself entirely to music. He received a performance degree from the Ecole Normale de Paris, won first prizes in piano and chamber music from the Conservatoire National Supérieur de Musique de Paris, became a Laureate of the Menuhin and Cziffra foundations, then won first prize at the Paris International Competition for Young Pianists.

So began an international career that has seen him perform at the most prestigious venues: the Philharmonie in Berlin, the Muziekgebouw in Amsterdam, the Palais des Beaux-Arts in Brussels, and the Cité de la Musique and Salle Pleyel in Paris, as well as in the United States, Canada, Russia, China, Korea and so on.

His recordings, as a solo performer and with the cellist Emmanuelle Bertrand, have won the highest accolades: an Editor’s Choice from Gramophone, a Cannes Classical Award, an “ffff” from Télérama, a Diapason d’Or of the year, a “Choc” from Le Monde de la Musique, a 10 from Classica, and a “Bestenliste” award from the German Record Critics’ Award.

As a composer, Pascal Amoyel is a Laureate of the Fondation Banque Populaire. His compositions include the cycle Job, ou Dieu dans la tourmente and Lettre à la femme aimée au sujet de la mort (on poems by Jean-Pierre Siméon). He is also involved in creating new kinds of concert: his stage show Block 15, ou la musique en résistance, directed by Jean Piat, was highly successful and was adapted for France Télévisions. He also devised Le pianiste aux 50 doigts and Le jour où j’ai rencontré Franz Liszt (directed by Christian Froment), which played to full houses at the Avignon Festival and for a run of several months at the Théâtre Le Ranelagh in Paris. Most recently he devised the family show Une petite histoire de la grande musique.

As professor of piano and improvisation at the Regional Conservatoire of Rueil-Malmaison, he created the Juniors Festival, in which the actors are children, including some with disabilities. He directs the Notes d’Automne festival, which he also founded, and has sponsored over forty premieres (with Jean-Pierre Marielle, Barbara Hendricks, Natalie Dessay, Richard Bohringer and others). He is also artistic advisor to the Estival de la Bâtie d’Urfé. He is the author of Si la musique t’était contée (published by bleu nuit), and produced a series of broadcasts on France Culture entitled “A history of music”. He has received the Arts-Deux Magots first prize in recognition of “a musician with qualities of openness and generosity” and the International League against Racism and Antisemitism’s Prix Jean-Pierre Bloch for “his work’s relevance to human rights”. He is a patron of the APTE (Autism, Piano and Educational Therapy) organisation, which provides music teaching to autistic children. 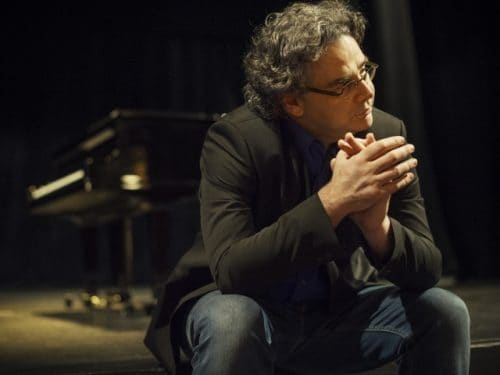