One of Ireland’s most successful musicians, Finghin Collins was born in Dublin in 1977 and, following initial lessons with his sister Mary, studied piano at the Royal Irish Academy of Music with John O’Conor and at the Geneva Conservatoire with Dominique Merlet. Winner of the RTÉ Musician of the Future Competition in 1994 and the Classical Category at the National Entertainment Awards in Ireland in 1998, he went on to take first prize at the Clara Haskil International Piano Competition in Switzerland in 1999. Since then he has continued to enjoy a flourishing international career that takes him all over Europe and the United States, as well to the Far East and Australia.  In October 2017, the National University of Ireland conferred on him an honorary Degree of Doctor of Music, in recognitiion of his outstanding achievements.

In 2010 Finghin Collins gave his second critically-acclaimed performance at the BBC Proms in London.  In 2013 he completed his three-year tenure as Associate Artist of the RTÉ National Symphony Orchestra in Dublin, completing a cycle of the complete Mozart and Beethoven piano concertos and commissioning a new work for piano and orchestra by Deirdre Gribbin.

In 2016 Finghin made his debuts in Turkey, China and Australia as well as performing throughout Europe. In 2017 he celebrated his 40th birthday with a solo recital at the National Concert Hall in Dublin as part of the Hall’s International Concert Season; other highlights included his debuts at the Santa Fe Chamber Music Festival, Zermatt Festival and return engagements with the RPO and in China.  In 2018 Finghin will make two appearances at the Wigmore Hall in London, participate in the Jury of the Dublin International Piano Competition, and perform in Ireland, the UK, Switzerland, Spain, Cuba and Greece. He will also give three world premiere performances: of Greg Caffrey’s “Environments I” with the Ulster Orchestra in January, of Deirdre Gribbin’s extended “The Binding of the Years” with the RTE National Symphony Orchestra in February and of John Buckley’s “Three Preludes for Piano” at the New Ross Piano Festival in September.

Over the past decade Collins has developed a close relationship with Claves Records in Switzerland, recording two double CDs of Schumann’s piano music (which won numerous awards including Gramophone’s Editor’s Choice in 2006), followed by a recording of works for piano and orchestra by Charles V. Stanford with the RTÉ NSO / Kenneth Montgomery (Editor’s Choice, May 2011). In May 2013 RTÉ lyric fm launched his latest recording of four Mozart piano concertos directed from the keyboard with the RTÉ National Symphony Orchestra. A new Chopin recital CD was released in 2017, a co-production between RTÉ lyric fm and Claves Records.

Finghin Collins is very active as a programmer, commissioner and concert presenter in Ireland, having been Artistic Director of the New Ross Piano Festival since its inception in 2006, and Artistic Director of Music for Galway since 2013. He also curates the annual Dublin Song Series together with Dearbhla Collins, and during the 2017/18, curates a six-concert series at the Kevin Barry Recital Room at Dublin’s National Concert Hall together with violinist Gwendolyn Masin.  In addition, he has been a member of the Board of Directors of the Dublin International Piano Competition (2006 – 2015), a member of the Board of Directors of the National Concert Hall (2001 – 2006), Musician-in-Residence in South Dublin County Council (2005 – 2008) and Artist-in-Residence in Waterford Institute of Technology (2005 – 2009). 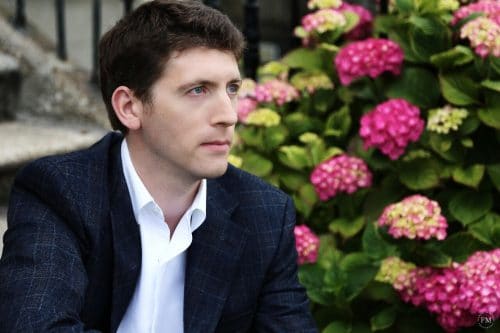