Caoimhín Ó Raghallaigh has been described as ‘the most singular traditional Irish musician of [his] generation’ by State Magazine, Ireland.

He describes himself:
If you’re wondering how to pronounce my name, try ‘Kwee-veen Oh Rye Allah’ on for size. It’s not quite right, but as a first attempt it’s not too shabby.

I make music on a 10-string fiddle called the hardanger d’amore, and I travel the world as a solo musician, in duos with Dan Trueman, Mick O’Brienand Brendan Begley, and as a member of The Gloaming and This is How we Fly.

I’ve had the extraordinary pleasure of performing on some of the most beautiful stages in the world, including the Sydney Opera House, the Royal Albert Hall and the Lincoln Center, although some of my favourite performances have been much more intimate and ephemeral events, special one-off things invented by friends. I live in Dublin, and love it for the place and the people.

There are twelve recordings to my name so far, ranging from quite traditional to fairly out there. I enjoy both equally, playing the old music that I love, and exploring the region where traditional music begins to disintegrate.

And his instruments:
I play a stunning 10-string instrument made by Norwegian luthier Salve Håkedal. The top five bowed gut strings plus the five sympathetic strings below give the fiddle a wonderful resonant sound. It is somewhere between a hardanger fiddle and aviola d’amore, so I’ve taken to calling it the Hardanger d’Amore.

I use baroque and transitional bows made by a wonderful French bowmaker named Michel Jamonneau. His bows are things of great beauty, and for me they are like paintbrushes for sound. They are the perfect match for the Hardanger d’Amore, and together they teach me something every time I pick them up, expanding what is thinkable and possible.

Take a look at Caoimhín’s website for more information and recordings. 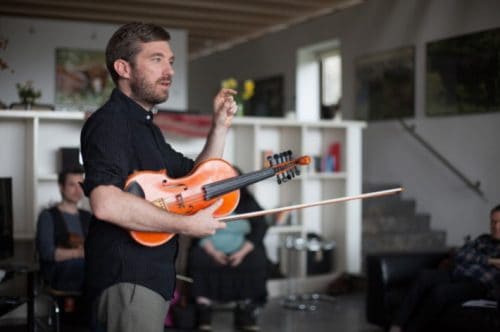