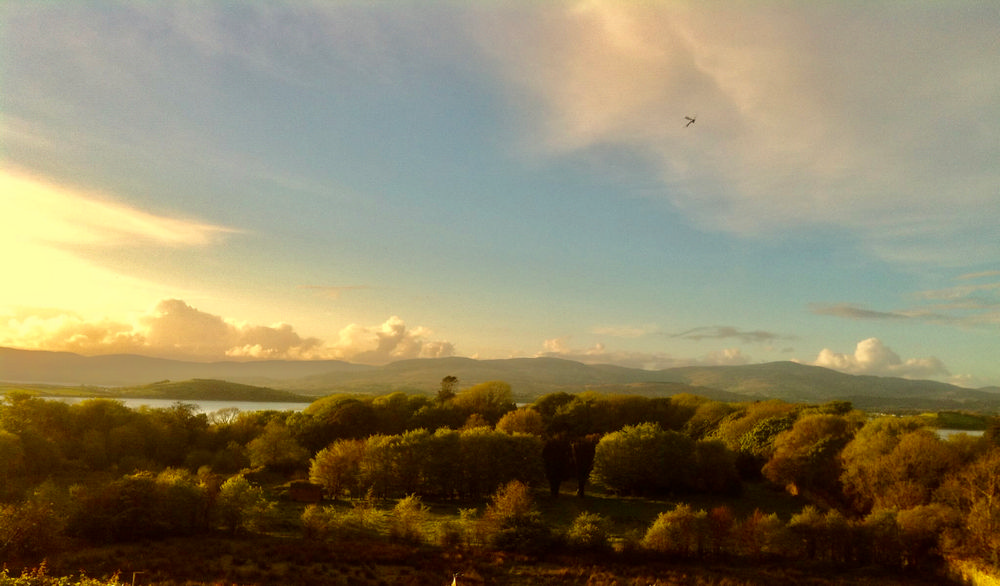 In winter, the mice moved in. The cottage was porous and they started oozing. They bothered me on many levels; their will to survive, their darting, and their tiny faecal mounds which said: ha, you didn’t catch me. A mouse never operates alone. If you see one, there’s always a doppelgänger, a shadow mouse going about its business in a wall cavity, waiting for their friend to return with food or to die. They must have lived outside until the temperature dropped and food thinned so the cottage was their winter residence that we had now conquered.

When the snow arrived, I felt quite sure that I was going to die. It’s important to be able to distinguish between your body and its environment: a human being is not an insect that needs to mimic a leaf. The pipes froze and we carried bottles of water from the town. When the water stopped running, I missed the shower where I’d scan for shapes made by the condensation. There was a pattern in the glass shower door that resembled Munch’s The Scream and I grew tender towards it, found myself looking at it every morning and angry when I washed it away accidentally.

Something happened behind the snow that winter, behind our backs. I drank gin to get closer to it, but it was nothing more than a change of seasons, even though I was convinced that someone had rearranged the fields and trees like furniture. The whiskered guests had departed, leaving ample going-away presents. I managed a grimaced smile when I saw a shrew frolicking in the garden. Spring had moved in and there was no removal van I could call to take her away.

Not wanting to treat the season like an unwelcome guest, I extended my home range to the neighbouring gardens and asked could I help out. I worked mainly in the rose plots, which also housed flowers I had never heard of like dierama and verbena that sounded more like Italian starlets. Verbena is a designated weed in some climates, and I spent a happy afternoon on a killing spree. I learnt that flowers could be invasive, pervasive, even murderous. I forgot my secateurs one morning, and returned to the house to find the first mouse of the season. We exchanged stares, both of us wondering why the other had come back, and why so early in winter.

I found myself in the peculiar position of being digital writer-in-residence in Bantry, five years after I had lived just outside the town. As the residence was remote, I wouldn’t actually live there, but would carry out research in abstensis and produce an event for the festival. There was no requirement for me to be in Bantry before the summer of 2022. I had discussed my project Stranger Samples with Eimear, which at the time of speaking was going to be about the different bodily samples that pass in and out of prisons: urine, noise, fabric, text and odour. I had chosen ‘stranger’ as in the comparative adjective of strange, not as the noun, a stranger. Many creative projects that start in prison are about what it’s like to be a prisoner. But it’s similar to the lifetime of a perfume. If the open notes are estranged from your experience, the effect won’t last.

I started to think about the strangest questions I could ask strangers; what’s your favourite blue object, what room in your house is most uncomfortable, do you have a favourite jacket? That’s how a life is constructed, fragment by fragment, sample by sample, floorboard by floorboard. So I went to Bantry in person and talked to strangers. The sorrow I brought with me in 2017 to the town had nothing to do with the place. It was not waiting to jump out at me once I arrived.

I interviewed women who had come to Bantry from somewhere else. They had all played a role in making me feel less of a stranger, and yet I had not really spoken with them during my time living there. Rachel, the cafe owner whose tables I sat at while trying to write, Lucy who may (or may not) have tested my urine and blood samples in the hospital, and Brigitte, whose garden I worked in and often waved at me from the path.

We think that the digital marks the end of the stranger, that there’s not a man who can’t be found. When I lived in Bantry, I could have been living anywhere in the world, and yet when I was sometimes more than 700 miles away, sometimes less than 70 miles away, I was living there. When I visited the town last month, the trees were still standing, the bay was still a blistering blue, and there must have been a mouse in a kitchen cupboard somewhere, making himself feel at home.

Sarah will produce and direct a living poem for the West Cork Literary Festival on 14th July 2022 at Bantry House in collaboration with violinist, Olga Bear and perfumer, Lucille Lefrang. Full details will be released early summer.