A recording studio and concert hall, it was built in 1952 specifically for radio and studio use. The introduction of low-noise, high-quality ultrasonic short-wave VHF in 1949 posed new challenges for studio buildings. An almost revolutionary construction method was therefore tested and successfully introduced at the Sendesaal: the hall is built completely room-in-room, ceilings and walls of the interior are supported by 655 springs of the outer shell, which means that the interior is optimally insulated against external noise. This fact, combined with the excellent acoustics, has turned the broadcasting hall into a treasure that is now also a listed building.

For 55 years it was one of Radio Bremen’s main music studios. Historically important recordings and concerts were held there by John Cage, Alfred Brendel, Keith Jarrett and Nikolaus Harnoncourt to name a few. When Radio Bremen moved to a new building in 2007, the old hall was sold for next to nothing. The Citizens' Initiative Association Friends of the Broadcast Hall, which includes all former music directors of Radio Bremen, fought the impending demolition and ultimately led to success. This group has been operating the broadcasting hall since 2009. 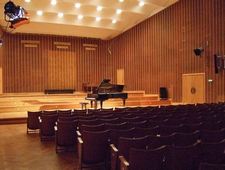