The study and protection of western Mazovia’s prehistoric heritage is the main focus of the Museum of Metallurgy, Pruszków, Warsaw. The museum was opened in 1975 in the wake of one of the most significant postwar developments in Polish archaeology - the discovery of the remains of one of the largest centres of iron metallurgy of the barbarian world from the turn of the 1st millennium. The museum is in the centre of approximately 240 archaeological sites spread across 300 km² in western Mazovia which document the mass production of iron by the people of the Przeworsk culture of the younger Pre-Roman period and the Roman period ( 2nd c. BC – AD 4th century.

The museum is housed within a historic building in the grounds of the Potulicki family country estate . Concerts are held in the Orangery and are organised within thematic cycles corresponding to the four seasons. An antique piano, manufactured in 1830 by Carl Julius Gebauhr, a contemporary of Chopin, takes pride of place in the museum. 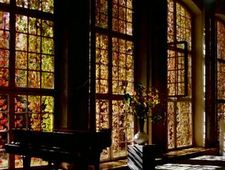