Located just off London’s Borough Hill Street and set in the beautiful conservation area of Trinity Church Square in Southwark, Henry Wood Hall is the city’s premier rehearsal and recording venue. It is large enough for a full symphony orchestra and choir yet intimate enough for a single soloist. In constant use for more than thirty years, it was formerly the Holy Trinity Church.
In 1970, the London Philharmonic and London Symphony Orchestras carried out an assessment of various churches in London with the intention of creating a new permanent orchestral rehearsal studio in the capital. Their research into disused churches identified the Holy Trinity Church in Southwark, which was subsequently opened in 1975.

The hall was named after Sir Henry Wood, the conductor best known for his association with the Proms, after receiving a substantial donation from the Henry Wood Fund ( set up to rebuild the blitzed Queen’s Hall).

Visiting orchestras include the St Petersburg Philharmonic and Japan Philharmonic, both of which have recorded and rehearsed in the venue. 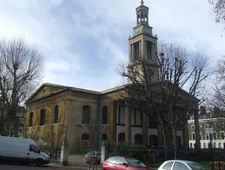