Located in the historic building of the Irish College, in the heart of the Latin quarter of Paris, the Centre Culturel Irlandais is Ireland’s flagship cultural centre in Europe. The Centre presents the work of contemporary Irish artists, reinforces the rich heritage of Franco-Irish relations and fosters a vibrant and creative resident community. In addition to its diverse cultural programme, the CCI houses France’s primary multi-media library of resources on Ireland as well as significant historic archives and an Old Library. The Fondation Irlandaise has overseen the building since the Consular Decree of Napoléon Bonaparte consolidated the former Irish, English and Scots foundations and colleges in Paris into the Collège des Irlandais.

In1769, the prefect of the Irish collegiate community in Paris, Laurence Kelly, acquired a town house on the rue du Cheval Vert and transferred ownership of the building to the community of students.  The prominent architect François Joseph Bélanger oversaw the demolition of part of the existing town house to make way for an imposing college building - a fifteen bay, four-storey structure with two wings on the garden front. It opened as the Collège des Irlandais in 1775. After the tumultuous period of the Revolution, the College was reopened under the auspices of the Fondation Irlandaise and the superior, Jean-Baptiste Walsh, persuaded Napoleon to change the name of the road to rue des Irlandais by a prefectural decree of 1807. In a state of disrepair by the end of the twentieth century, the Irish government funded the complete restoration of the building in order to launch the Centre Culturel Irlandais in 2002.

Two of the Virtual Chamber Music Festival’s concerts were recently recorded in the Chapel at the Irish College. Dedicated to St. Patrick, the chapel was built for the religious needs of the collegial community – the pews are thus facing each other rather than towards the altar. The original paintwork was replaced c. 1860 with the highly decorative interior that has survived up to the present day.

In a vaulted room above the Chapel, is the Old Library. It was the working library of the community of lay students and seminarians. A treasure from the manuscripts collection of Ireland, the Great Book of Lecan, written between 1390 and 1418, was brought to the College for safe-keeping; it remained there for most of the 18th century before being returned safely to the Royal Irish Academy in Dublin in 1787. The original library collection of the Collège des Irlandais was entirely lost during the Revolution.  Its current collection of nearly 8,000 items, of which almost half date from the 15th to the 18th centuries, largely consists of books and manuscripts from suppressed religious establishments, inherited or bought in literary depots after the Revolution, and works of Irish interest acquired in the 19th century. 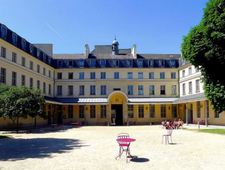