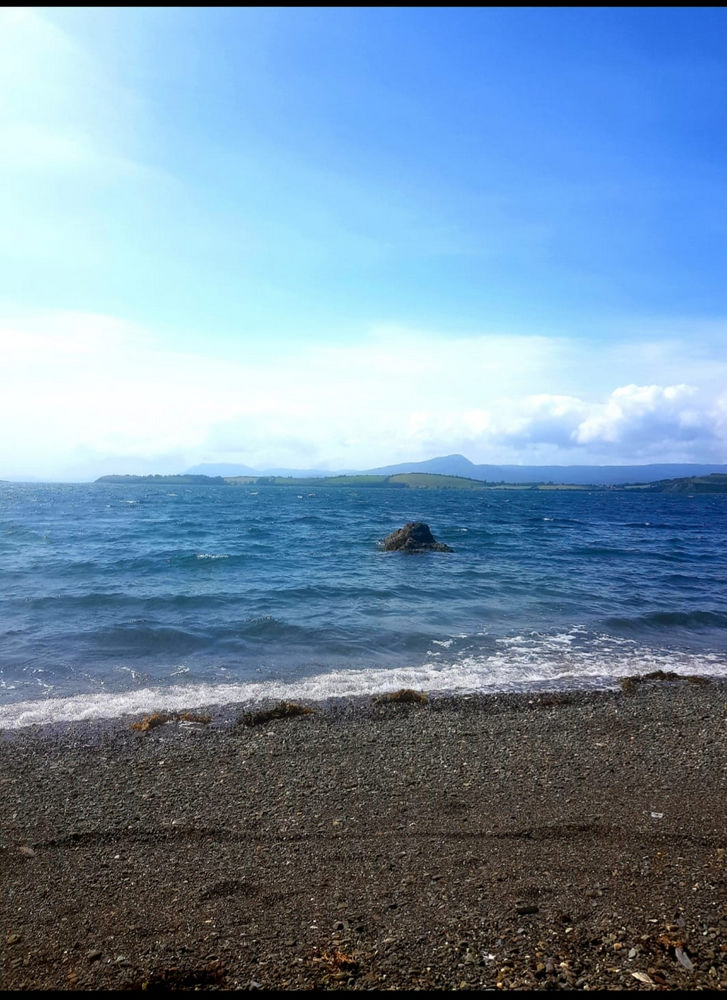 As I work primarily with text, I’m trying out different ways to bring words to life in Stranger Samples. The ‘interview’ from the French verb s’entrevoir: “to see each other, visit briefly, have a glimpse of” rhymes perfectly with the idea of the sample as something small, in space and time, which can enlarge and expand through attention, analysis and attitude.

Each interview will tune into a particular human sense, in this case, taste. I’ve also chosen to focus on this sense as today (February 1st) is the Celtic Festival of Imbolc, which translates as ‘in the stomach’.

The inventor, Thomas Edison is considered the father of the modern interview and used to screen prospective employees by getting them to eat soup in front of him so he could observe whether they used seasoning before or after they tasted the food. If candidates pre-seasoned the soup, they weren’t hired as Edison thought them presumptuous.

I designed an anti-interview which looks at hospitality in the form of the stranger and includes the wedding recipe ‘something old, something new, something borrowed, something blue.’ I omitted the final line (a sixpence in her shoe) to pay homage to the lifting of the Marriage Bar in Ireland in 1972, a law that required single women to resign from their job upon getting married.

For this series, I’ve invited women based in Bantry, the home of the West Cork Literary Festival, who inspire me and who work in particularly sensorial occupations. This week’s anti-interview is with Rachel Dare, co-director of Organico, a natural grocers, artisan bakery and Deli in Bantry, West Cork. I met with Rachel over an Earl Grey at their shop on Glengarriff Road. This year Organico celebrates its 30th birthday.

always welcome in Organico. There’s a beautiful poem by David Whyte, ‘The Stranger in You.’ I love how he always turns things inward, and the poem invites you to welcome your inner stranger:

make yourself a door through which

to be hospitable, even to the stranger in you.

My parents moved here in 1980. They met working in the college canteen and turned it vegetarian, before starting a cafe of their own in Brighton. They dropped out of college and wanted to get away from conservative politics in Britain and to work in and with nature. They first went to Wales, where they didn’t find the welcome they’d hoped for, and then travelled to Ireland with a barrel top caravan and horse and met people here in West Cork that welcomed them.

Even though they were blow-ins, they were taught how to farm by neighbours as they had no experience. West Cork is a melting pot; the foundations had been laid by the time my parents had arrived. There was an article about it in the Irish Times by Manchán Magan tracing the background of the bohemian blow-ins to West Cork. The ground for the stranger was already fertile by the time my parents came, but they were able to nurture connections, firstly through my father’s live yoghurt business, and then by opening a zero-waste grocers. Both of those things couldn’t have happened without strangers being open to them.

What’s the strangest thing about your job?

It’s strange to me that even after more than 15 years of running this business I still find the accounts a bit of a nightmare, we are lucky to have lots of help, but I still can’t (under) stand them!

Which room of your house do you feel most comfortable in?

We bought our family home that I lived in since I was young and we’re ten years into the renovation. We put a great deal of thought into how we wanted to lay out the main bedroom, and ironically, I’m most comfortable in the spare room. It’s spartan, painted white and has a picture of two puffins on the wall. Our dog likes it too. It might be an energy thing, or that it’s the least cluttered room in the house-in-progress, but that’s my favourite spot now.

There’s a knock on the front door, who would you like it to be?

My mother. She died seventeen years ago. Especially as we used to joke about the front door needing replacing and we didn’t do it during her lifetime. We used to talk about the draughts. She didn’t love that our family home was so dark, and that was one of the conditions of my taking it on, that we had to get more light into it. We blew a hole in the front of the building and put glass doors in and as a result we don’t actually have a conventional front door.

There’s a knock on the back door, who would you like it to be?

Because my father was always dedicated to fairness, I must say him. He passed away two years after my mother. Up until recently we didn’t have a back door either. It had been boarded up. We had bought the windows and hadn’t installed them yet and the door wasn’t very necessary. Each house has a different etiquette; I have neighbours who would use the back door more.

The idea for setting up Organico came from my father. He had a heart attack and the first meal he was given was a fry-up and he researched the relationship between diet and physical health. There are still people in their 80s and 90s who tell us that my father Alan never tried to sell them something because it was expensive. He would give you the best and cheapest option because he wanted it to be accessible to everyone, regardless of income. In Organico, he created a second home, a physical space where people could chat, connect, and create. He didn’t necessarily love the day-to-day running of the business; it was his dream to have a community space. We held my mother’s funeral afters upstairs in Organico and the idea for the cafe evolved from that event. 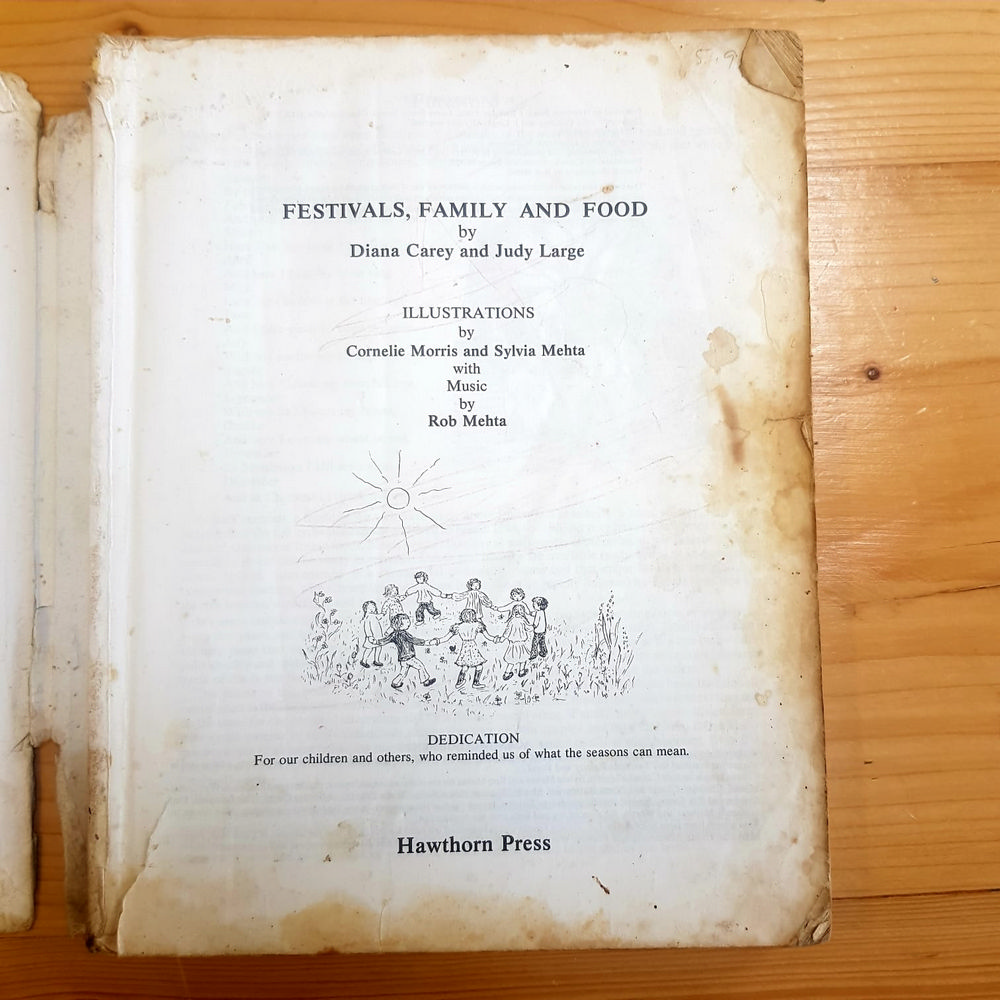 I feel like this is the book of our childhood: Festivals, Family and Food (1982) by Diana Carey and Judy Large. It goes through the calendar year, celebrating feast days and festivals. There are also little notes from my mother written in it. Going through the loft in our house, I found these blown Easter eggs and the instructions are taken from this book. You pick a willow branch that serves as the Easter branch, and every year you add more eggs, replacing the ones that get broken along the way as well. The eggs I brought in today are about thirty years old. 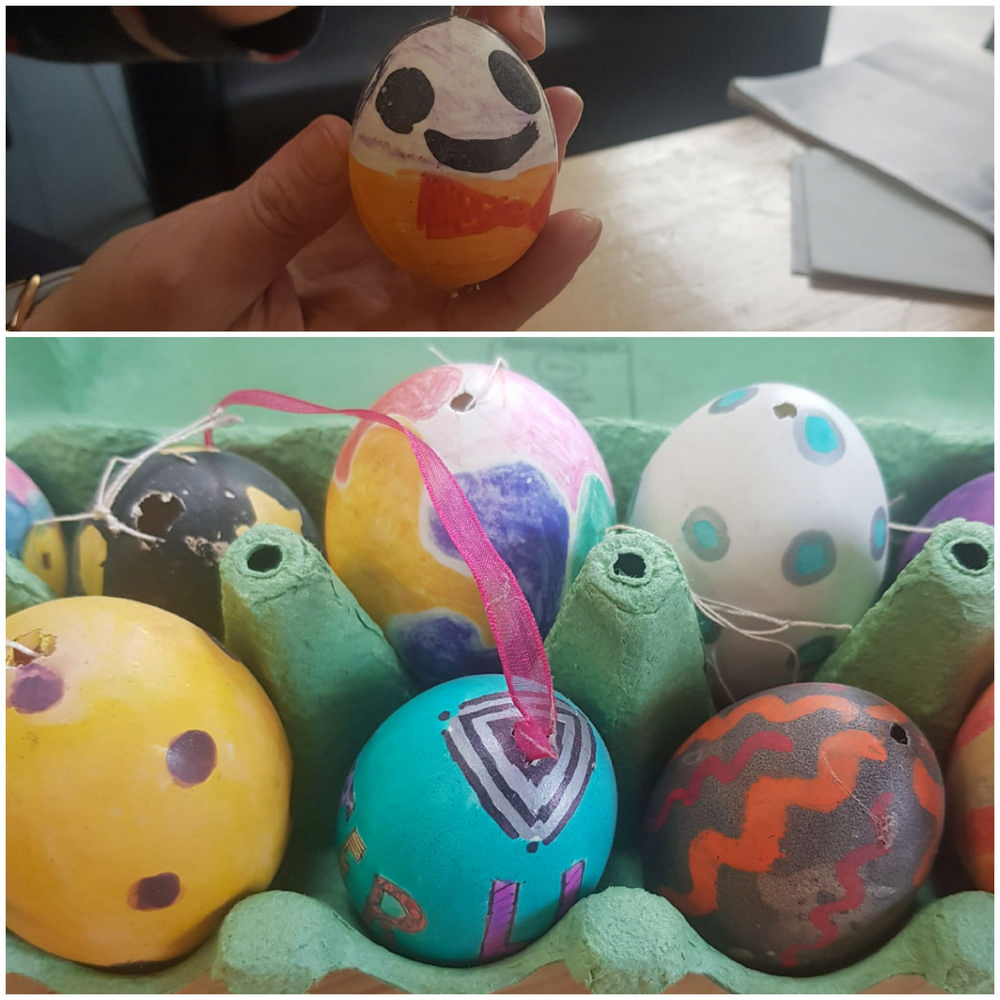 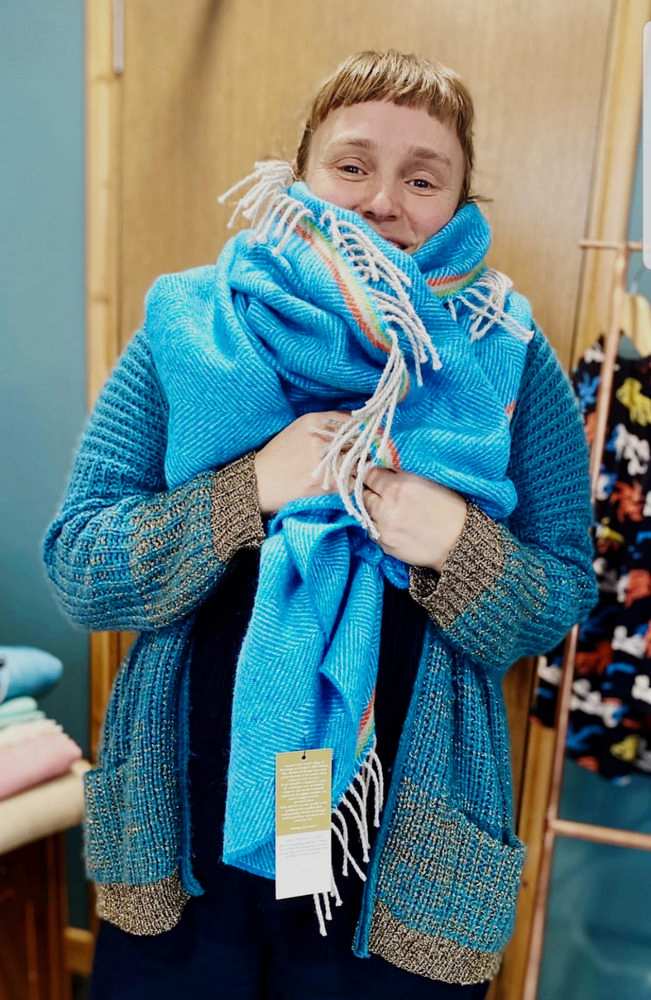 I chose this beautiful scarf by McNutt of Donegal from Forest & Flock; the colour reminds me of my drive home which passes the sea every day and it’s always a different shade of blue. I’ve always valued being comfortable above everything else (not many pairs of heels in my life!) and having beautiful hand made things in my home has always been a privilege and something I really appreciate. 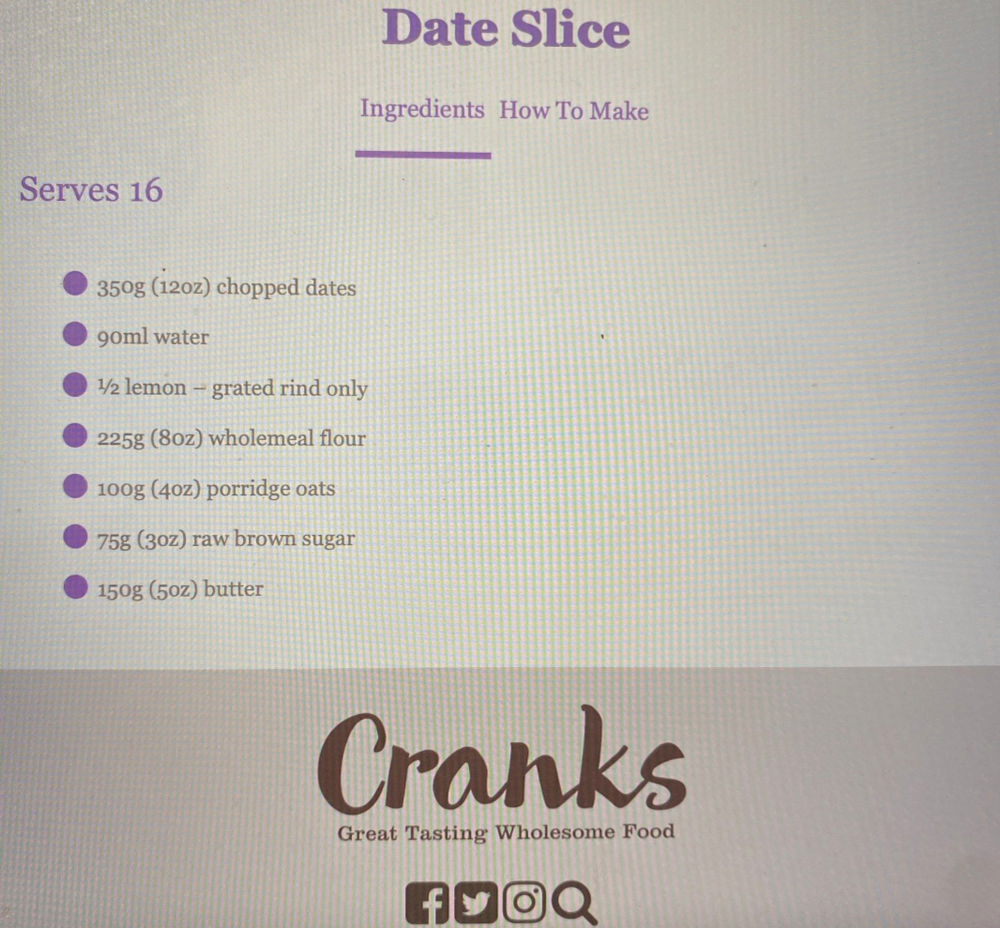 It’s a recipe for the date slice, an Organico favourite for nearly 20 years, or so I thought, but it’s borrowed from Cranks vegetarian restaurant in London (still open since 1961). It was one of the recipes that my mother introduced to the bakery. It really sustains you and that’s why I think it’s worked as an Organico staple. My mother was never interested in the profit side of the business, she always thought it was enough if decent food could sustain us and if you can live well that was the baseline. 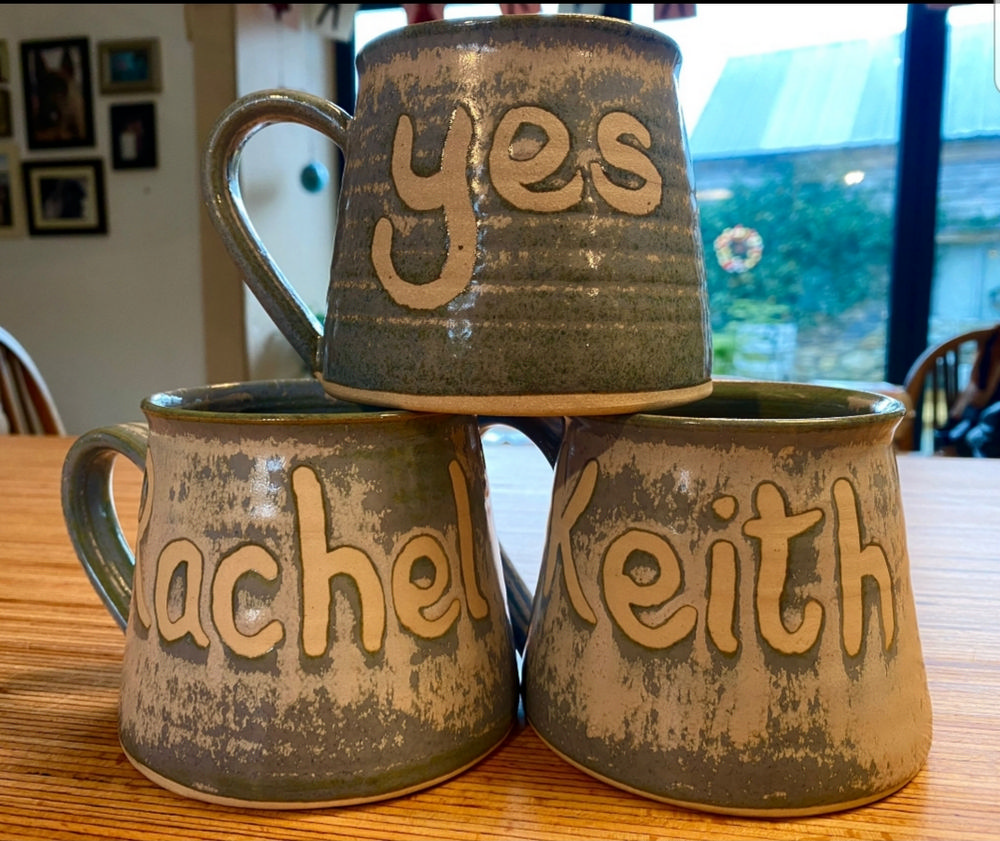 These mugs were made for me by Helen at Dunbeacon Pottery. We worked together on the marriage equality campaign (YES Equality) in 2015. She made a mug for everyone involved in the Bantry campaign team. We got her to design mugs for Organico, which we sell downstairs and when I got married, she gave Keith and I a package of crockery, including these mugs with our names on them.

I also worked on the Repeal the 8th amendment campaign and hosted pro-choice meetings upstairs in the cafe. My sister and I were nervous at putting ourselves and the business out there, but felt we had no choice but to use our platform in a positive, meaningful way. Some customers were challenged by our visible support of the campaign, but we had to be proactive and engaged as it was such an emotive and important subject. We took responsibility and action for our stance; it wasn’t just a case of putting posters in windows, but we went to meetings, connected with the campaign community, and met people whose lives were deeply impacted by this law. It is all part of the infrastructure of trust and loyalty that has allowed our business to survive through so much, including an economic crash and a pandemic. If you’re a multinational brand in a city, it’s more abstract, you can detach and hide, but we can’t (and don’t want to) hide.