Westland Baroque, formed in winter 2022, is an ensemble comprising members who are all students or recent graduates of the Royal Irish Academy of Music (RIAM) in Dublin with a particular passion for Baroque music and enjoy exploring unique repertoire under the expert mentorship of Professor David Adams.

Kevin Meehan is currently taking the Bachelor in Music Performance at the Royal Irish Academy of Music (RIAM) in Dublin, where he studies baroque and modern violin with Claire Duff and Mia Cooper respectively. Kevin has a special interest in Baroque music, and for the past three years has been a member of the Irish Youth Baroque Orchestra (IYBO). In September ’22, Kevin travelled to Croatia with the IYBO, performing both as a principal ensemble member and as an orchestral soloist at the highly regarded Baroque Festival at Varazdin.

Michael Noonan is a Dublin-based flautist currently in his final year of his undergraduate at the Royal Irish Academy of Music studying under Susan Doyle, Vourneen Ryan and Sinead Farrell. In chamber music, Michael is a part of the Merrion Trio, where he, along with Lucy Varney and Emma O’Brien endeavour to play pieces by underrepresented composers and chamber ensembles in order to challenge and expand the classical canon. Michael’s interest in baroque music really grew after learning about historically informed performance and culminated with buying a traverso and was able to give his first public performance on it at RIAM ChamberFest 2022 alongside Kevin Meehan and Peadar Ó Lionsigh after mentoring by David Adams and Claire Duff.

Cellist Peadar Ó Loinsigh has performed in venues across Ireland and studied with some of the world’s most illustrious musicians. As a chamber and Orchestral musician, Peadar has performed in the National Concert Hall, The Wexford Opera house and performs regularly with the National Symphony Orchestra and RTE Concert Orchestra. He also studied Baroque Cello with Aoife Nic Athlaoich, and regularly performed in Baroque ensembles and Operas as part of his degree. He currently plays on a Cello made by Cork based maker Bertrand Galen in 2013 and a bow made by Robert Pierce.

Laoise McMullin is currently studying on the Master’s Degree in RIAM, specialising in Piano Performance and Composition. Also a keen composer, studying under Jonathan Nangle, Laoise has had works performed in concerts presented by her RIAM colleagues, and has many projects in the works for the coming year. Since commencing harpsichord studies in 2021 with Professor David Adams, Laoise has further developed her passion for early music. In April 2023, she was invited to participate in a concert at the Cobbe Collection Trust at Hatchland Park in Surrey, UK, where she got the opportunity to play on keyboard instruments from the beautiful Cobbe Collection. 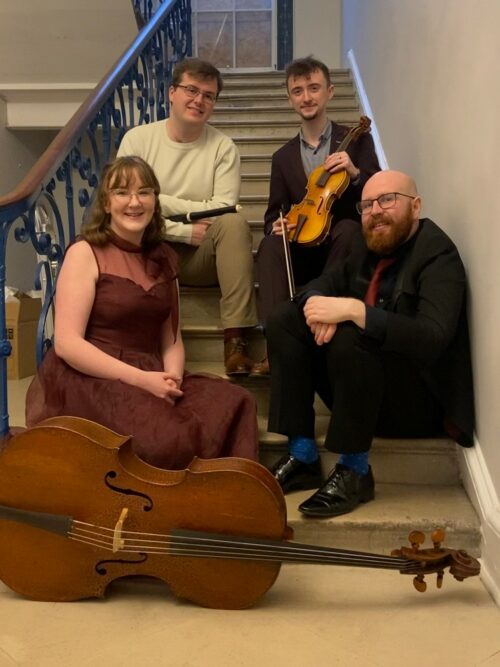