Violinist Viviane Hagner has won exceptional praise for her intelligent musicality and passionate artistry. She performs with “poise and magnificent assurance” (The Times, London) and “an almost hauntingly masterful display of technique and artistry” (Washington Post), while the Berliner Morgenpost wrote: “Listening to Viviane Hagner play the violin is an enchanting experience … she is both a thoughtful and brilliant violinist. In her playing, she knows how to combine reflection and luminosity in the most striking way.”

As well as bringing insight and virtuosity to the core concerto repertoire, Viviane Hagner is an ardent advocate of new, neglected and undiscovered music. Composers whose work she champions include Sofia Gubaidulina, Karl Amadeus Hartmann and Witold Lutoslawski. In 2002 she gave the world premiere of Unsuk Chin’s Violin Concerto with the Deutsche Sinfonie-Orchester Berlin and Kent Nagano, later playing the work in the United States – an event which prompted the San Francisco Chronicle to acclaim her performance as “vibrant, warm-toned and jaw-droppingly precise [and] may well be unimprovable.” After her 2006 premiere of Simon Holt’s new Violin Concerto with the BBC Symphony Orchestra led by Jonathan Nott, The Sunday Times critic remarked she “caught the music’s soul”. In May 2012, a live-recording of Christian Jost’s Violin Concerto “TiefenRausch” conducted by the composer will be released on the Capriccio label.

A committed chamber musician, Viviane Hagner performs at important venues including Amsterdam’s Concertgebouw, Palais des Beaux Arts Brussels, and Tokyo’s Suntory Hall. She has been a featured artist at renowned international festivals including Rheingau, Mecklenburg-Vorpommern, Salzburg Easter, Marlboro, and Ravinia. She regularly performs recitals with her sister, pianist Nicole Hagner. Recital performances have taken her to some of the world’s great stages including Berlin Philharmonie, Wigmore Hall London, Châtelet Paris, and Salzburg Mozarteum, and with pianist Mitsuko Uchida at Tokyo’s Suntory Hall.

Viviane Hagner’s 2011–2012 season began with an unexpected Cleveland Orchestra debut as she stepped in on one day’s notice to perform with David Zinman. Upcoming highlights include performances with the Orpheus Chamber Orchestra at Carnegie Hall, with Pinchas Zukerman and the National Arts Centre Orchestra in Ottawa, with the BBC Symphony Orchestra and Neeme Järvi, as well as with London’s Philharmonia and Esa-Pekka Salonen at London’s Royal Festival Hall, at the Edinburgh Festival, and at Beethovenfest Bonn.

Her most recent recording has been released on the Hyperion label featuring Vieuxtemps’ Violin Concerti 4 & 5, and the Canadian company Analekta has released her recording of Unsuk Chin’s Violin Concerto with Kent Nagano and the Orchestre Symphonique de Montréal. Her first solo recording on the Altara label features works by Bartók, Hartmann and Bach.

Viviane Hagner dedicates herself to outreach activities for audiences of all ages, from kindergarten to retirement homes, as well as teaching violin students in masterclasses. Committed to introducing music to school children, she participates at “Rhapsody in School”, a mostly German-wide project initiated by pianist Lars Vogt.

Viviane Hagner grew up and resides in Berlin where she has been Professor at Berlin University of the Arts from 2009–2013. Since 2013, she has held the same position at Mannheim Conservatory of Music and Performing Arts. 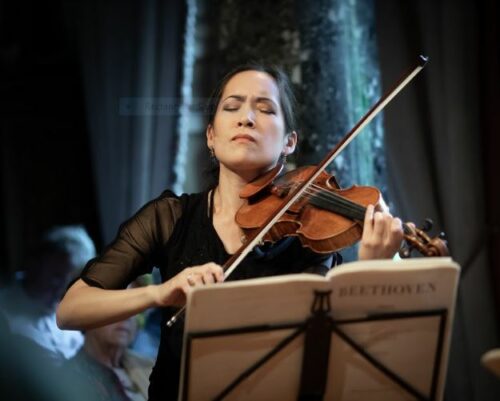