“A truly refreshing performance! Richly coloured, honest, full of joy and with good agogics! This trio belongs to another league!” – Ensemble Magazine

Founded in 2010, Trio Gaspard is one of the most sought-after piano trios of their generation, praised for their unique and fresh approach to the score.  Trio Gaspard is regularly invited to perform at major international concert halls, such as Wigmore Hall, Berlin Philharmonie, Essen Philharmonie, Grafenegg Castle Austria, Salle Molière Lyon, NDR Rolf-Liebermann Hall, Hamburg and Shanghai Symphony Hall as well as making appearances at festivals such as Heidelberger Frühling, Mantua Chamber Music Festival, Boswiler Sommer and PODIUM Festival Esslingen. Important engagements over the past year include recitals at the BBC Proms, Unione Musicale Turin, Wigmore Hall, KKL Lucerne as well as at Berlin’s Pierre Boulez Saal. A highlight of 2018 was performing Beethoven triple concerto in Switzerland under the baton of eminent musician and conductor, Gabor Takács-Nagy.

As well as exploring and championing the traditional piano trio repertoire, Trio Gaspard works regularly with contemporary composers and is keen to discover seldom-played masterpieces. In 2022, they performed Ethyl Smyth’s Piano Trio in D minor at the BBC Proms, broadcasted live by the BBC. They have also played the rarely performed “Présence- Ballet Blanc” for piano trio and speaker by Bernd Alois Zimmermann, working alongside contemporary dancer Luka Fritsch. Their performance of this was recorded live at the Pierre Boulez Saal and was released on the trio’s “Live in Berlin” CD, in cooperation with German Radio. The Trio is currently in process of an extensive commissioning project which sees composers such as Olli Mustonen, Patricia Kopatchinskaja, Helena Winkelman, Sally Beamish, Kit Armstrong, Johannes Fischer and Leonid Gorokhov writing companion pieces to the Haydn trios. Their debut project with Chandos Records sees all of Haydn’s 46 trios be recorded over the next 5 years alongside these commissioned contemporary companion pieces. Volume one of which was released in 2022 to critical acclaim, including reviews in The Strad, The Times and Limelight Magazine. The former of which featured the album as The Strad Reccommends and wrote “It’s truly a delight, and leaves this listener hungry for more”.

Trio Gaspard, whose members hail from Germany, Greece and the UK, has worked regularly with the co-founding member of the Alban Berg Quartet, Hatto Beyerle. They also studied at the European Chamber Music Academy, where they worked with Johannes Meissl (Artis Quartet), Ferenc Rados, Avedis Kouyoumdjian, Jérôme Pernoo and Peter Cropper (Lindsay Quartet). The trio already has considerable teaching experience, having given masterclasses at Kyung-Hee University in Seoul, at the Royal Irish Academy of Music in Dublin and at the Shanghai Chamber Music Festival 2016 and 2018, where they also sat on the jury of China’s national chamber music competition. Trio Gaspard held a fellowship of chamber music at the Royal Northern College of music in Manchester from 2017-2019, and have won first prizes and special prizes at the International Joseph Joachim Chamber Music Competition in Weimar, the 5th International Haydn Chamber Music Competition in Vienna and the 17th International Chamber Music Competition in Illzach, France. In 2012 they were awarded the “Wiener Klassik” Preis der Stadt Baden in Austria. 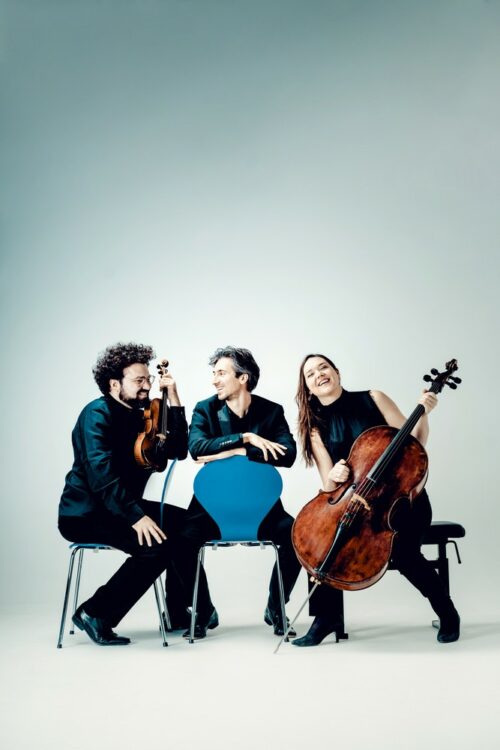