The Vanbrugh has evolved from the work of the Vanbrugh Quartet which was based in Cork as RTE’s Resident Quartet from 1986 to 2013 and as Artists-in-Residence at University College, Cork from 1990 until the retirement of violinist Gregory Ellis in 2017. Over three decades the quartet gave close to three thousand concerts, presenting the chamber music repertoire to audiences throughout Ireland, Europe, the Americas, and the Far East. Commercial recordings include more than thirty CDs of repertoire ranging from the complete Beethoven quartets to many contemporary Irish works. In 2016 the group was presented with the National Concert Hall’s Lifetime Achievement Award in recognition of their contribution to music in Ireland.

Keith Pascoe, Simon Aspell, and Christopher Marwood continue to perform together as the nucleus of the Vanbrugh and are joined by guest artists for performances of a wide range of chamber music repertoire.

Keith Pascoe was invited to join the Vanbrugh Quartet in 1998 whilst still a London-based musician. He studied violin, piano, chamber music, and conducting at the Royal College of Music under Jaroslav Vanecek, Eileen Reynolds, Aeolian and Amadeus Quartets, and Norman Del Mar. In 1985 he founded the Britten Quartet who became EMI exclusive artists having previously made numerous recordings with other labels, touring the world for ten years. After the Britten Quartet disbanded, it wasn’t long before he heard Ireland’s call…

In Cork he hit the ground running with a hectic national and international schedule, touring for nearly twenty years with the Vanbrugh Quartet. In quieter times he was inspired to take further studies including research into the music of Luigi Boccherini. Several of his critical editions have been published, and he is lecturer in chamber music and violin at TU Dublin.

His solo violin work includes performing cycles of the complete Mozart and Beethoven Sonatas on a tour of Ireland supported by the Arts Council. And as director-violinist of Evlana, an Irish contemporary music group, he continues to work with living Irish composers. As conductor of the Cork Fleischmann Symphony Orchestra for many years, he has conducted and played concertos on numerous occasions.

The renaissance of the Vanbrugh has brought him further inspiration and refocus, opening new possibilities in repertoire, collaborations and artistic challenges.

A graduate of the Royal Academy of Music, London, Simon Aspell is one of Ireland’s leading viola players. Aside of his work with Vanbrugh Quartet, Simon has also had a successful career as an orchestral principal, guesting with the Chamber Orchestra of Europe, Royal Northern Sinfonia, Royal Liverpool Philharmonic, as well as appearing as soloist and recitalist throughout Ireland and the UK. A frequent guest with numerous ensembles, Simon has also joined his colleagues at the RIAM’s chamber group ACE (Academy Chamber Ensemble), performing regularly throughout Ireland. Simon teaches viola and chamber music at MTU Cork School of Music and at the Royal Irish Academy of Music, in Dublin.

As cellist of the Vanbrugh Quartet for 32 years, Christopher Marwood enjoyed a busy
career performing throughout Ireland and touring worldwide. He co-founded the West Cork Chamber Music Festival in 1996 and remains director of the Festival’s masterclass programme. He is director of the National String Quartet Foundation, planning and raising funds for more than fifty concerts annually. He teaches at MTU Cork School of Music and at the Royal Irish Academy of Music and continues to perform both as soloist and as chamber musician. His recent CD of works by Boris Tchaikovsky was nominated for the 2019 International Classical Music Awards. 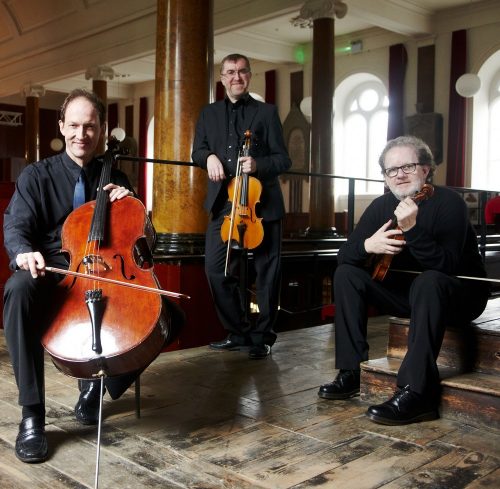