The Spero Quartet is a new quartet founded in 2020, bringing together three of Ireland’s finest young musicians with Canadian violinist Brigid Leman.

Jennifer Murphy has performed in the Barbican Centre, London, the Four Seasons Centre for the Performing Arts, Toronto, and the National Concert Hall, Ireland, and has had performances aired on BBC Radio (UK) and CBC (Canada). Recent solo engagements include a performance of the Korngold Violin Concerto conducted by Bramwell Tovey in Koerner Hall, Toronto, and Chausson’s Poeme with the RTÉ Concert Orchestra, Ireland. Jennifer regularly performs in solo and chamber music recitals in Europe and North America, and has collaborated with David Geringas, Barry Shiffman, Ernst Kovacic, Steven Dann and Marc Ryser. Summer festival performances include the Music by the Sea Festival, the West Cork Chamber Music Festival, Domaine Forget Chamber Music Festival, and the Banff Centre Masterclasses.

Brigid Leman was born in Ottawa, Canada. She studied in San Francisco, Zurich and Weimar and from 2012 to 2019 held a contract position with the Hamburg State Opera in Germany under Simone Young and Kent Nagano. She has played as a regular guest in the Hamburg Symphony, the NDR Elbphilharmonie Orchestra (Hamburg), the State Philharmonic Orchestra of Lübeck and the Århus Symphony in Denmark. In 2020 she moved to Ireland where she often plays in the RTÉ Concert Orchestra and the National Symphony Orchestra.

David Kenny studied with Constantin Zanidache and Simon Aspell at the CIT Cork School of Music and played principal viola with the European Union Youth Orchestra and the National Youth Orchestra of Ireland. In 2016, David was appointed to the viola section of the RTÉ Concert Orchestra.  An experienced chamber musician, David has performed at the West Cork Chamber Music Festival, Music in Drumcliffe Festival, Interlaken Classics Festival and has collaborated with the Ficino Ensemble, Musici Ireland and the Vanbrugh Quartet.=

Yseult Cooper Stockdale studied in Cork, Dublin and Leipzig and enjoys a versatile career between the UK and Ireland. She has worked with both RTE orchestras, the Irish Chamber Orchestra, Welsh National Opera, Southbank Sinfonia and Bournemouth Symphony Orchestra. As chamber musician she has played in groups including the Vanbrugh, the Alberi Piano Trio, Musici Ireland, Crash Ensemble, Ficino Ensemble and London-based Scordatura Collective. She has a keen interest in exploring new music, and has performed over 50 premieres with Kirkos Ensemble. 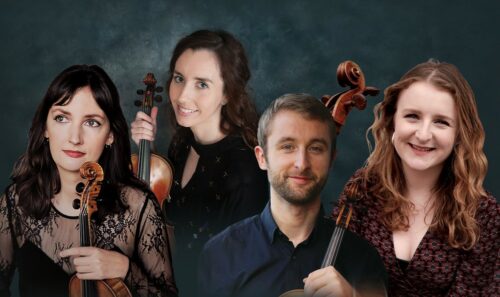