Jadran Duncumb is of English and Croatian origins, although from the age of nine he grew up near Oslo in Norway.

He made his mind up to study music when he won the String Category and thus reached the final of the “BBC Young Musician of the Year”.

Jadran began to explore baroque music during his studies at the Royal College of Music (where he studied guitar under Gary Ryan and lute under Jakob Lindberg) in London and has since been very active as a continuo player performing with various European ensembles as well as being in demand as a soloist specialising mainly in repertoire for the baroque lute and baroque guitar. He is a member of Barokkanerne and Oslo Circles.

He has given chamber concerts with musicians such as Amandine Beyer, Rolf Lislevand, Mario Brunello and regularly plays with Lina Tur Bonet and Musica Alchemica, and Giuliano Carmignola in the programmes ‘Carmignola and Friends’. With his pianist brother Emil Duncumb, he has explored programmes of  pieces for their combination of piano and guitar on both period and modern instruments, while his collaborations over many years with the violist André Lislevand lead to the album ‘Forqueray Unchained’ (together with the harpsichordist Paola Erdas) on Arcana in 2021 – winning a Diapason Dècouverte in May 2021.

His duo with the violinist Kinga Ujszàszi, “Repicco“, was selected to join the Creative Europe’s “EEEmerging Artists Programme” giving concerts and classes in Romania, Latvia, Italy and at the Ambronay Festival – where they were also awarded the audience prize for their concert. They were subsequently invited to give several concerts throughout Europe in the coming concert seasons, and to serve as mentors in the 2017 Ambronay Baroque Academy. Their debut recording ‘Assissini, assassinati’ came out on  Editions Ambronay in Autumn 2017 (5 Diapasons).

He frequently performs with violinist Johannes Pramsohler, touring with programmes of music for baroque lute and violin by Bach and Weiss and their contemporaries.  Their CD of duos and solos by J. S. Bach and Sylvius Weiss came out in October 2017 on Audax Records.

In 2015, he was awarded the 1st prize at the international “Maurizio Pratola” lute competition in L’Aquila, Italy, as well as receiving a distinction for his Master-recital in lute and early plucked instruments. A year later he also received another distiction in basso continuo, always at the Hochschule für Musik in Trossingen, Germany where he studied under Rolf Lislevand.

Since then, he regularly gives solo recitals and is asked to give masterclasses, specialising mainly on the baroque lute and baroque guitar. He has recorded two solo albums for Audax Records, Weiss & Hasse – Lute Sonatas (2018 -Audax Records) and Bach – Works for lute (2021) (Diapason D’Or May 2021). His first experience as a  musical director will come in November 2021 in a concert of arias with Rachel Redmond, chamber music, and concertos with lute with Barokkanerne in May 2021.

Future projects include a recording and tour ‘A  ma guitare’ (Alpha) with the soprano Giulia Semenzato of music by Sor, Rossini and Giuliani and volume two of Bach’s ‘Lute Works’ with Audax. 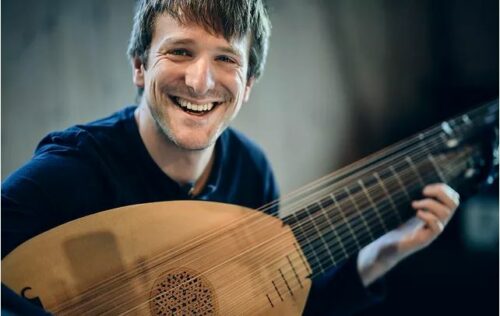