Violinist Florian Donderer, praised for playing with ‘exceptional beauty, breath-taking technique and shocking intensity’ is one of the most interesting musicians of his generation. He is a versatile musician, highly valued as chamber musician, soloist, concertmaster, and conductor, collaborating with distinguished musicians such as Paavo Järvi, Viktoria Mullova, Elisabeth Leonskaja, Steven Isserlis, Lars Vogt, Alexander Lonquich, Matthias Görne and his wife and brother-in-law, Tanja and Christian Tetzlaff.

He is first violin of Signum Quartet, one of the most adventurous and outstanding string quartets of our time. Concerts with Signum Quartet have taken him to international podia from Berlin‘s Boulez Saal and Elbphilharmonie Hamburg to London’s Wigmore Hall and Concertgebouw Amsterdam.

Future engagements include the Quartet’s debut at New York’s Carnegie Hall in 2023.

Florian is especially renowned as an artistic leader, directing orchestras from the concertmaster’s desk. He was longstanding concertmaster of one of the world’s leading chamber orchestras, The Deutsche Kammerphilharmonie Bremen, and was instrumental in defining what has become one of the orchestra’s hallmarks – playing without a conductor. Prestigious Chamber Orchestras such as Scottish Chamber Orchestra, Kammerorchester Basel, Norwegian Chamber Orchestra, Sinfonietta Riga, Tallinn Chamber Orchestra and Camerata Bern, invite him as director and soloist. He made his debut as conductor with Ensemble Oriol and Christiane Oelze at Berlin Philharmonic Hall, followed by a CD recording with Deutsche Kammerphilharmonie Bremen and Tanja Tetzlaff.

He has conducted among others the Kammerakademie Neuss, the Südwestdeutsches Kammerorchester Pforzheim and Festival Strings Lucerne. Florian is artistic director of Rottweil Musikfestival one of Germany’s longest standing chamber music festivals. With his wife, Tanja Tetzlaff he is curating a chamber music series at Sendesaal Bremen.

He plays a violin built by German Violinmaker Peter Greiner in 2003 and bows by Nico Plog from Antwerp. 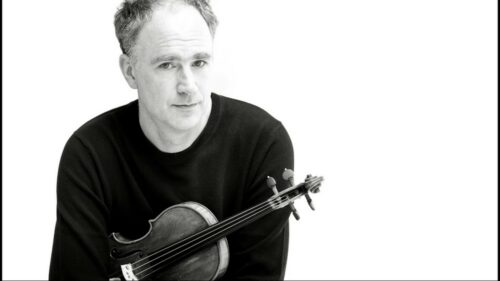