One of Ireland’s most successful musicians and significant musical ambassadors, Finghin Collins was born in Dublin in 1977 and, following initial lessons with his sister Mary, studied piano at the Royal Irish Academy of Music with John O’Conor and at the Geneva Conservatoire with Dominique Merlet.  His international career was launched by winning first prize at the Clara Haskil International Piano Competition in Switzerland in 1999. He has performed in recital and with major orchestras throughout Europe and the United States, as well as in the Far East and Australia.

In 2019 Finghin performs in the UK, Denmark, the USA, Italy,  Switzerland, Russia, Turkey and undertakes an extensive Irish recital tour marking 20 years since his Clara Haskil Prize.  The year 2020 will see solo, chamber and concerto performances of Beethoven across Europe to mark the composer’s 250th anniversary, as well as  his début with the Russian National Orchestra in Moscow.

Over the past two decades Collins has maintained a close relationship with Claves Records in Switzerland,  recording many award-winning CDs of music by Mozart, Beethoven, Schumann and Stanford. A Chopin recital CD was released in September 2017, a co-production between RTÉ lyric fm and Claves Records, while in spring 2020 Claves released Collins’ latest release: a recording of the Mozart Piano Quartets with Rosanne Philippens (violin), Máté Szücs (viola) and István Várdai (cello). 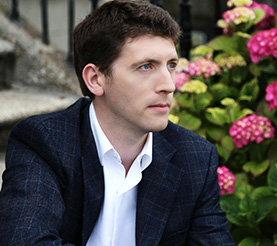