The Festival is grateful to Zoe Nagle for stepping in at short notice to play with the quartet.

Sonoro Quartet was founded in 2019 in Belgium by violinists Mona Verhas and Jeroen De Beerr, violist Séamus Hickey and cellist Paul Heyman. Despite the fact that they are a relatively young ensemble, they already made a name for themselves playing on national and international stages.

Sonoro Quartet is currently studying at the Nederlandse Strijkkwartet Academie in Amsterdam (NSKA) where they are being coached by renowned professors such as the members of Danel Quartet, Eberhard Feltz, Hagen Quartet etc. The quartet is also studying at the Orpheusinstitute in Ghent and follows lessons on a regular basis with renowned professors such as Marc Danel (Danel Quartet) and Heime Müller (Artemis Quartet).

This young quartet played already in numerous halls : previous and future engagements include concerts in venues such as Amuz and Desingel in Antwerp, De Bijloke in Gent, Bozar in Brussels, Tivoli Vredenburg in Utrecht, Stadsgehoorzaal Leiden, Arte Amanti festival, Festival Midis Minimes, B-Classic festival, and Sonoro Quartet also played the première of the first string quartet by Eric Domenech on the Beethoven Festival 2020 in Bonn, which was recorded for the SWR Television. 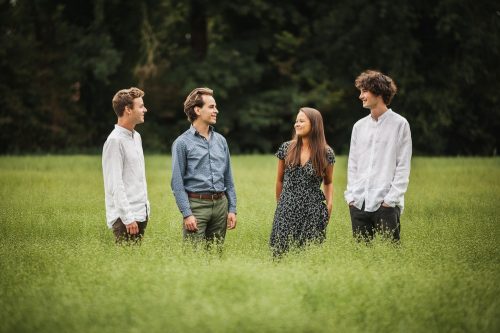