Sara Ferrández began directly with the viola at the age of three. Given her maturity as an interpreter, she started to perform on stage from the age of seven. Born in Madrid in 1995 she entered the Escuela Superior de Música Reina Sofia at a very young age. After completing her studies in Madrid she won the Juventudes Musicales scholarship to study abroad as well as the Humboldt Wardwell Stipendium and she moved to Berlin to study with the prestigious soloist Tabea Zimmermann in the Hochschule für Musik Hanns Eisler where she did both her Bachelor and Master degree.

Despite her youth Sara has already performed in some of the major concert halls including the National Concert Hall of Spain, L’Auditori Barcelona where she presented the 20/21 season as a soloist, the emblematic Berlin Philharmonie, Elbphilharmonie in Hamburg,Victoria Hall in Switzerland or Salzburg Festpielhaus.

Highlights for the upcoming season include her debut with the Radio Television Orchestra in the Monumental Theatre of Madrid, her debut with the Orchestra de Córdoba and 15 Chamber Music Concerts in the most prestigious halls of Europe being part of the Echo Rising Stars of this season with Cristina Gómez Godoy, Oboe, and Mario Häring, Piano. Sara is a member of the Karajan Academy of the Berlin Philharmonic since December of 2019, as well as a member of the West Eastern Divan Orchestra under the direction of Maestro Daniel Barenboim, and from September of 2021 a student of the Kronberg Academy. She plays on a Nicolas Léonard Tourte bow loaned by Stephan Jansen. 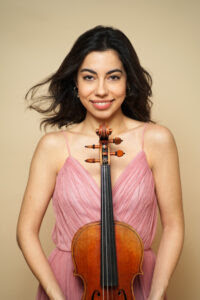