Derek Hickey hails from Adare, Co. Limerick. Both his grandfathers played fiddle and his own musical career began at ten years of age when his uncle left an accordion in the family home. Derek progressed to dance tunes within weeks though he didn’t begin lessons – under the tutelage of Dónal de Barra – until he was 12.

Derek’s professional career began three years later when he joined the Shannonside Céilí Band. Formed by the Liddy family the band was particularly popular in the north of the country. It also toured extensively in England and made regular trips throughout Europe.

In 1991 Frankie Gavin asked Derek to join him for regular sessions in his then leased hotel in Kinvara, Co. Galway. One year later, at just eighteen years of age Derek joined Arcady, Johnny ‘Ringo’ McDonagh’s band. Frances Black, Brendan Larrisey and Patsy Broderick were also members of the band at that time and many other household names have played in the line-up including Sharon Shannon, Cathal Hayden and Gerry O’Connor.

In 1995 Derek joined the legendary De Dannan. The De Dannan sound has always been based around the interaction between Frankie Gavin’s virtuoso fiddle and the box. Other great box players in De Dannan’s colourful history have included Jackie Daly, Mairtin O’Connor and Aidan Coffey. His pairing with Gavin proved to be one of the best box and fiddle duets ever. He toured with De Dannan until they disbanded in 2003. Derek is a button accordion tutor on the BA Irish Music and Dance at the Irish World Academy. 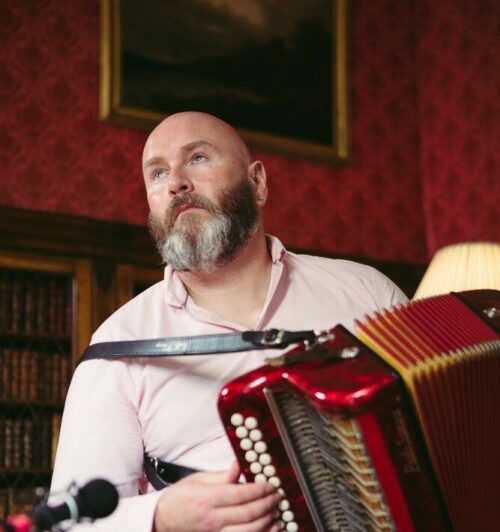