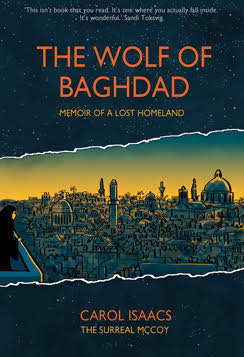 Carol Isaacs is a keyboard player and accordionist in the pop and world music fields. She has worked with many international artists including Sinéad O’Connor and the Indigo Girls. Also known as cartoonist The Surreal McCoy, her cartoons have been published in the New Yorker, Private Eye, Sunday Times and many other places. The Wolf of Baghdad is her first book and is a graphic memoir based on her own family’s recollections of their lost Iraqi homeland. She has also turned it into an animation, playing Arabic accordion on the soundtrack.

Carol Isaacs: The Wolf of Baghdad