The Danu Quartet is a newly formed ensemble of second level students from CIT Cork School of Music. They are tutored by Simon Aspell and Christopher Marwood. They made their debut as part of RTÉ Lyric FM’s live broadcast in December 2018. They have performed concerts in the Triskel Arts Centre arranged by the National String Quartet Foundation, and in The Crawford Art Gallery as part of the “Music at Midday” series.

Kate began her violin studies in CIT Cork School of Music in 2007. She was taught by Eithne Willis for ten years and is currently a student of Katherine Hunka. She has been a prizewinner at both Feis Maitiu and Feis Ceoil, and has enjoyed membership of the CSM Symphony Orchestra and the National Youth Orchestra. She is an enthusiastic chamber musician and has played in a number of string quartets over the years.

Helen Rutledge studies violin with Colette O’Brien in the CIT Cork School of Music. She has been a member of the National Youth Orchestra of Ireland since 2016 and is also a member of the CSM Symphony Orchestra. She has won numerous awards in Feis Ceoil, Feis Maitiu and CSM competitions as well as being awarded Most Distinguished Student in Intermediate Cycle Strings. Helen is also an accomplished pianist.

Stephen has studied viola at the Cork School of Music since the age of seven and is currently being taught by Simon Aspell. He is a member of both the national youth orchestra of Ireland and CSM symphony orchestra. He has won prizes at feis maitiu and feis Ceoil competitions. He also studies piano in CSM with Nicholas O’Halloran.

Callum is a student of Christopher Marwood at CIT Cork School of Music, Ireland. Callum has participated in competitions and won prizes at both local and national level. In 2017, Callum was awarded the National Concert Hall Award for Young String Musicians (2017-2019). He has been a member of the National Youth Orchestra of Ireland, CSM Symphony Orchestra and the prestigious Verbier Festival Junior Orchestra in Switzerland. 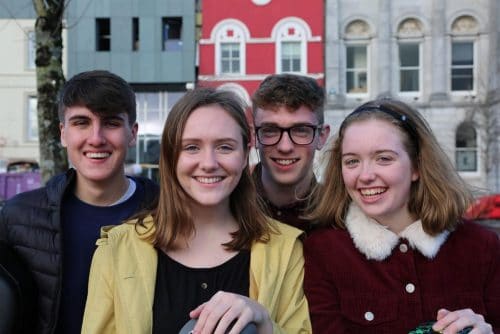