The two-­‐time ECHO Award winner Ramon Ortega Quero is recognized around the world as one of the most promising musicians of his generation.

He received solid training from Miguel Quirós early on at the conservatory of his native city of Granada. Quero became a member of the Andalusian Youth Orchestra as a twelve-­‐year-­‐old. In 2003, the oboist cleared an important hurdle when conductor Daniel Barenboim accepted him as a member ofthe East-­‐West Divan Orchestra.

One of Ramón Ortega Quero’s finest hours was winning First Prize at the ARD Music Competition held in Munich in September 2007.

Since Spring 2008, he is also Principal Oboe of the BavarianRadio Symphony Orchestra under its Principal Conductor Mariss Jansons and is working with worldknown conductors such as Riccardo Muti, Herbert Blomstedt, Sir Colin Davies, John Eliot Gardiner, Daniel Barenboim, Nikolaus Harnoncourt and Bernhard Haitink.

In 2015 Ramón Ortega Quero played the world premiere of the oboe concerto „Legacy“, which composer Oscar Navarro dedicated to him.

Performance highlights in season 2015/16 included his debut at Carnegie Hall New York, in 2016/17 the oboist came back to the Konzerthausorchester Berlin conducted by Ivan Fischer and played concerts in Edinburgh and Glasgow with the Scottish Chamber orchestra under conductor Robin Ticciati. He was also reinvited by the Munich Chamber orchestra and the Kammerakademie Potsdam. Furthermore he’ll travel to Asia for concerts with the Taiwan National Symphony Orchestra and the Hong Kong Sinfonietta.

The concert season 2017/18 will bring Ramón Ortega Quero to several concerts to spain– together with the Orquestra de Extremadura as well as the Orquestra de Castilla y León-­‐, to Finland and on a tour through the netherlands, together with the Philharmony Zuidnederland. With the wind quartet variation5, with whom his last album „variation5“ was released on Berlin Classics (Edel), he will be on tour again in spring 2018. Furthermore, he is invited by the Bach Orchester Leipzig.

The 2010/11 season was highly effected by his nomination asa “Rising Star” by the “European Concert Hall Organisation”, which lead him to the most important concert halls in Europe (Brussels, Luxembourg, Vienna, Salzburg, Hamburg, Amsterdam).

His debut CD “Shadows” (Solo Musica) won the ECHO KLASSIK award in 2011. In 2012 he was awarded with his second ECHO KLASSIK, which he received together with his colleagues Sebastian Manz, Marc Trenel, David Alonso Fernandez and Herbert Schuch for the “Chamber Music recording of the year”. Other recordings have been released on Genuin, recorded with the Kammerakademie Potsdam and with the pianist Kateryna Titova. In 2015 his solo album „Bach: New Oboe Sonatas“ was recorded at the Label EDEL.

Ramón Ortega Quero is a fellowship award-­‐winner of the Borletti Buitoni Trust London. 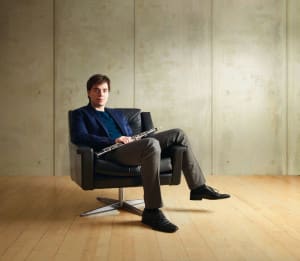