Born in 1995 to a family of musicians, Nathalia Milstein starts the piano at the age of 4 with her father Serguei Milstein. She enters his class in the Geneva Conservatory of Music in 2009, where she obtains her diploma with distinction in 2012. In 2013, Nathalia enters the class of Nelson Goerner at the Geneva High School of Music.

In May 2015, Nathalia launches her international career by winning 1st Prize at the Dublin International Piano Competition. First female winner since the Competition’s foundation, Nathalia gets engagements all over Europe and North America in the most prestigious halls, such as the National Concert Hall in Dublin, the Carnegie Hall in New York, the Wigmore Hall in London, the Gewandhaus in Leipzig.

Nathalia performs in France and abroad, giving solo recitals and chamber music concerts throughout Europe; she has also performed for the French television and the Dutch radio. For several years she has been playing in duo with her sister violinist Maria Milstein.

Nathalia Milstein is currently pursuing her Master’s degree at the Geneva High School of Music in the class of Nelson Goerner. 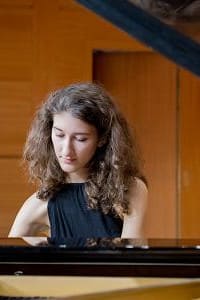