Mate Bekavac is recognised as one of the great clarinetists of his generation, despite of his “commercial shyness”. Wherever he appears, he’s hailed among collegues and critics as the “secret favorite”, a full-blooded musician and a virtuoso who risks and isn’t spoiled by current fashion tendencies of music industry. A devoted, silent seeker with a special, subtly nuanced sound beyond bright or dark, french or german clarinet stereotype tendencies (he is perhaps the only one who ever gained perfection in both systems), always in favor of musical expression and sincere transmission of written or hidden musical texts. His repertoire ranges from baroque adaptations, classical, romantic and contemporary clarinet repertoire, as well as jazz and klezmer influenced pieces. He gained his wide international acclaim by his single time performance of his own arrangement of the Carmen Fantasy, which is documented on YouTube.

He was born in Ljubljana, Slovenia in 1977 and received his first musical education with F.Trzan and D.Brlek in native Ljubljana. He continueted his studies at University of Graz with B.Kovacs, then took his MA degree at Salzburg Mozarteum with A.Brandhofer. He also studied in profesional studies program at Juilliard School of Music in New York under C.Neidich and in “cycle de perfectionement” at Paris Consrvatory (CNSM) with Michel Arrignon. He has won the Mozarteum 1992 award, the Eurovision Jury award in Warsaw 1994, Grand prix of the Yamaha competition in Vienna 1994 and competitions in Lisabon (1994), Seville(1995), Belgrade(1997). He was also finalist of YCA competition on New York 1996. He appeard as soloist with chamber orchestras Franz Liszt, Cappela Istropolitana, Camerata Israel, Moscow soloists Salzburg soloists, Munich soloists and Zagreb soloists, Orchester der Philharmonie der Nationen, Saarlandischen Rundfunk, Orchester der Oper in Frankfurt, Symphonie Orchester Basel and all slovenian orchestras.

He tends to enjoy most of his time away from daily tumult in slovenian mountains, studying, researching, developing new insights and ways of musical understanding as well as discovering nature and passionatly cooking on open fire for his friends and himself. 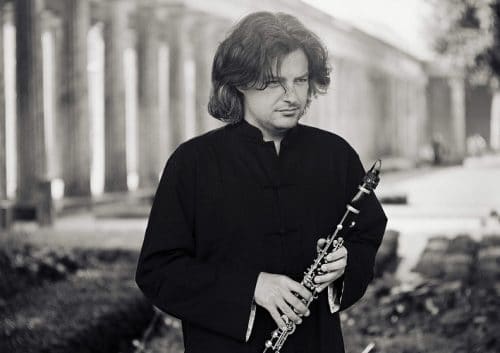