With 5 years old Marie-Louise (°Roermond, the Netherlands) started violin lessons in Roermond with Melanie Engelen. At the age of 13 she also started  viola and when she was 17 she completely switched to viola. After her Bachelor studies with Marc Tooten at the Maastricht Conservatory, she went to continue her master studies with Prof. Wolfram Christ at the Hochschule für Musik Freiburg. After finishing her master, she is now in the Konzertexamen/Meisterklasse, also with Prof. Wolfram Christ.

Already at a very young age she got in touch with chamber music and attended the Orlando Festival Kerkrade several times with the youth orchestra of the festival. In 2015 she came back with the Moretti String Trio to attend the Orlando Masterclass.

In 2011 and 2012 she was ,a.o. as a principal viola, member of the National Youth Orchestra of the Netherlands. Since 2012 she is co-principal viola (since 2015 principal viola) of the Gustav Mahler Jugend Orchester, that gives concerts in the major concert halls of Europe, such as Musikverein Vienna, Het Concertgebouw Amsterdam, Royal Albert Hall London etc. In November 2012 she took part in a collaboration project with the Gustav Mahler Jugend Orchester and the Staatskapelle Dresden.  She also often plays in the philharmonie zuidnederland, Philharmonie Baden-Baden (principal viola) and the Gürzenich Orchester Köln (co-principal). Also, she played in the academy of the Mahler Chamber Orchestra.

With the Mahler Jugend Ensemble she played at chambermusic festivals in Triëste and Munich, as well during the tours with the Gustav Mahler Jugend Orchester in Bolzano and Lisbon. Beside the Orlando Festival, she took part in several masterclasses such as the Encuentro de Musica y Academia de Santander (Spain), Aurora Masterclass (Sweden), Carl Flesch Academy Baden-Baden(Germany) and the Gustav Mahler Academy in Bolzano (Italy)  where she got lessons and played chamber music with musicians as Guy Braunstein, Wolfgang Boettcher, Wolfram Christ, Hartmut Rhode, Hariolf Schlichtig, Erich Höbarth, Isabelle van Keulen, Jurgen Kussmaul, and Antonello Farulli.

Being a member of the St. George Quintet (www.stgeorgequintet.com) she plays many concerts in Belgium and was Laureate of the ‘ Supernova Competition ‘  2016.

As a soloist she played with the KHG-Orchester Freiburg, Freiburger KammerSolisten, Youth Orchestra of the Orlando Festival, Arka Symfonieorkest and the Philharmonie Baden-Baden.

Marie-Louise plays a Max Möller viola (1946, Amsterdam) which was kindly provided to her by the Dutch Musical Instruments Foundation. 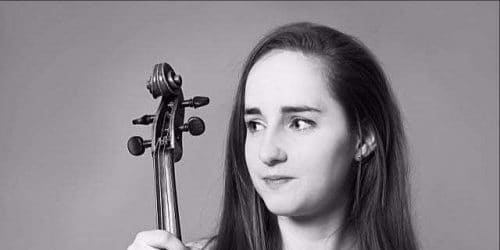