One of Ireland’s most accomplished violinists, Mairéad Hickey was NCH Irish Young Musician of the Year 2010 – 2012. She won third prize as well as a Special Prize for the best interpretation of a virtuoso work in the 2016 International Louis Spohr Competition and first prize in the 2012 Jeunesses Musicales Violin Competition, Romania. She has performed in every major concert hall in Ireland and abroad in venues including the Beethoven-Haus, Bonn and Carnegie Hall, New York.

Mairéad began playing the violin aged 3 with Jyrki Pietila. From 2003 she studied with Adrian Petcu at the CIT Cork School of Music in Ireland.  She is now studying with Mihaela Martin at Kronberg Academy,  Germany, sponsored by the Hilmar Kopper Stipendium.

An enthusiastic chamber musician, Mairéad is co-founder of the Ortús Chamber Music Festival which takes place annually in Cork. She has collaborated with artists including Barry Douglas, Tabea Zimmermann and Fazil Say. She also plays traditional Irish music and is the winner of eight All Ireland fiddle titles.  Her instructional app, ‘Irish Fiddler’ is available on iTunes.

Mairéad currently plays a 1702 Tononi violin, kindly loaned to her by a generous sponsor through the Beares International Violin Society.  She is supported by the Arts Council and the Music Network Music Capital Scheme, funded by the Department of Arts, Heritage and the Gaeltacht. 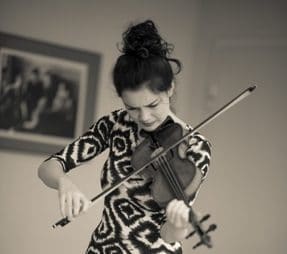