Luigi Gaggero has been performing as cimbalom and percussion player for 20 years and, more recently, as a conductor of contemporary music ensembles at important concert halls and festivals all over Europe, USA, and China (Philharmonics in Berlin, Paris and Kiev, Milano Musica, Carnegie Hall, Salzburger Festspiele, BBC Proms in London, Biennali in Salzburg and Venezia, Klangspuren…)

His original interpretations approach classical and contemporary pieces from the same point of view: in this way ancient music gets colored with the typical freedom of the contemporary music, which, in turn, despite of its complexity, abandons itself to the sweep of “classical” phrasing.

Gaggero is musical director of the Ukho Ensemble Kyiv, which he co-founded in 2015; he premiered many works written especially for him and the Ensemble, and worked together with well-known musicians like Marino Formenti, Mario Caroli and Frank Wörner. The first opera production of the Ensemble (Limbus-Limbo by Stefano Gervasoni) staged by Katya Libkind sold out at the National Opera of Ukraine, receiving 5 stars on Classic Voice Italy. Further projects with the Ensemble in the next future include CDs consecrated to Gervasoni (Winter & Winter), Solbiati (EMA Vinci Records), Hosokawa (Stradivarius) and Andreyev (l’empreinte digitale).

As a director of his vocal ensemble La Dolce Maniera (Paris), Gaggero recorded for Stradivarius 2 CDs with music by Monteverdi and Gesualdo: “these fresh interpretations, wrote Vittorio Ghielmi, far away from any ‘museality’, remind closely of Caravaggio’s chiaroscuro and the Baroque sculpture, letting this music powerfully come to life again before our eyes”.

He has studied percussions and conducting with Andrea Pestalozza, cimbalom with Márta Fábián and, studying with E. Guggeis and R. Seegers, was the first percussionist to receive the soloist-diploma with honors at the Hochschule für Musik Hanns Eisler in Berlin.

Gaggero is professor of cimbalom at the Conservatoire and at the Académie supérieure de musique in Strasbourg, where he also conducts the contemporary music ensemble of the Académie. 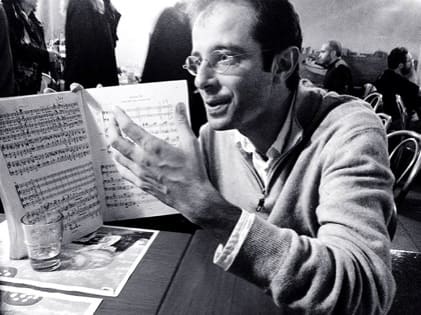