Described as the “future stars of British Chamber Music” (Eaton Square Concerts), the Halcyon Quartet are a passionate and dedicated ensemble that formed in 2012 at the Royal Academy of Music, studying under the tutelage of Jon Thorne, Martin Outram and the Doric Quartet. For the last four years they have been recipients of the Academy’s Davey Posnanski Quartet Scholarship, which has granted them masterclasses with a number of distinguished chamber music ensembles and
performers including Sylvia Rosenberg, Richard Ireland and the Heath, Chilingirian, Escher and Fine Arts Quartets. Over the last three years they have won accolades including the 2017 St. Peter’s Prize, Sir Arthur Bliss and Harold Craxton Prizes; they were recently selected as one of the Academy’s A.S.S.E.T ensembles for advanced string quartet training. In 2015 they represented the Academy at the Richard Carne Intercollegiate String Quartet Competition.

The past year has seen the Halcyons perform in numerous venues across the UK, including Eaton Square as part of their “Best of British” Season, Colston Hall in Bristol, Cambridge University and the British Museum. In 2016 they were Teaching Quartet-in-Residence at the Dartington International Summer School, where they also performed in a sold-out concert alongside Alison Balsom. They are now Quartet-in-Residence for the Broadstone Music Series, tutoring young people in chamber music and musicianship. The Halcyons made their debut on BBC Radio 3 in 2015 as part of the BBC Proms Composer’s Portrait of Hugh Wood and, more recently, at Wigmore Hall as part of their “For Crying Out Loud” Series.

The 2018 season sees the Halcyons performing at Wigmore Hall in a collaboration with the Nashn Ensemble, returning to Dorset for a recital and mentoring with the students of Broadstone Music Series, and undertaking their first international concerts, performing as part of the Bermuda Festival for the Performing Arts. 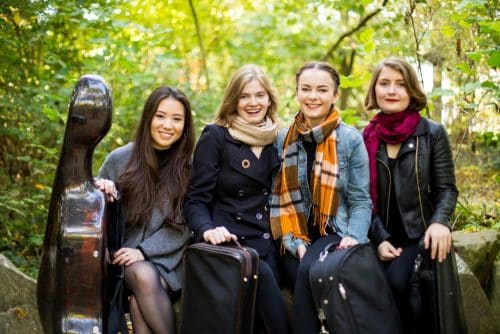